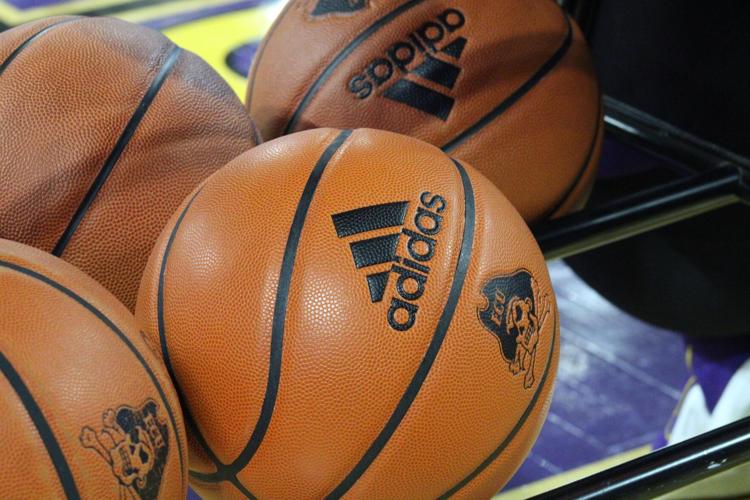 Stamped with the Pirates logo, the game balls are lined up for the Minges Madness three-point contest. 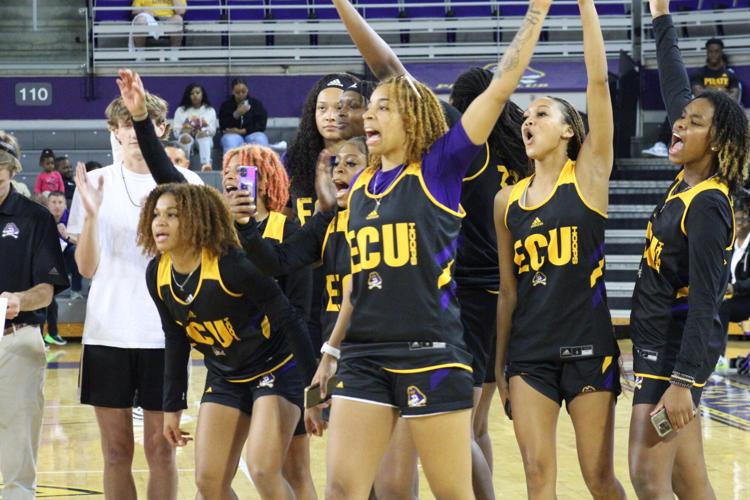 The ECU women's basketball team cheers on the other participants of the Minges Madness Skills Challenge.

East Carolina University’s men and women’s basketball teams hosted their Minges Madness event to kick off the 2022-2023 season on Oct. 26 at 7 p.m. in Minges Coliseum in Greenville, North Carolina.

The doors opened around 6:20 p.m., nearly a half hour after the advertised time. The first 100 fans were greeted at the door with free pizza, while the first 1,000 fans were met with a T-shirt. As attendees continued to pile into the arena, the event began right on time at 7 p.m. with an opening statement from the host.

Schwartz finished his speech with a charge to ECU students, encouraging them to fill the lower bowl of the gymnasium for opening night and beyond. When Schwartz passed the microphone off, coach McNeill spoke.

“It’s going to be exciting.” McNeill said. “It’s great to see the Greenville community come out and support basketball.”

Following the opening speeches, the men’s and women’s basketball teams were announced in lineup style to the cheer of Pirate Nation. After the teams made their way to the court, ECU’s drumline came to center court to perform for the fans and teams alike.

With the first bout of entertainment performed, the first competition began. The first competition was a skills challenge, where three teams composed of one player from the men’s team, one player from the women’s team and one fan in attendance were all brought out to score a layup, free throw, three point shot and half court shot in under 45 seconds. The time with the fastest time would win.

Team one stepped up to play, but following seven missed three point shots and seven missed shots from half court, time expired to put them in technically first, but any finish not timed out would place them ahead of team one. Team two did just that, finishing all four tasks in only 40 seconds. Things were smooth sailing for team two until the half court shot, in which six shots were missed before a basket was scored.

The final team was brought to center court, led by graduate student center Ludgy Debaut. The team nailed their free throw and layup on the first attempts, but had issues hitting the three point shot. After four missed shots, Debaut swished a three pointer then stepped back to hit the half court shot. Debaut shot the half court shot flat footed, throwing the ball towards the hoop. The crowd erupted, crowing team three victorious at only 40 seconds elapsed.

Attention was brought back to basketball with the next event, the three point contest. Once again, three teams competed against one another for the title. The first team, this one composed of a new group of three including a men’s player, women’s player and fan, struggled to hit anything from the three racks and came away with only 13 points scored.

Team two was radically different. Led by sophomore guard Javon Small, team two was red hot. Knocking down shot after shot, team two finished the contest with 25 total points. Lastly, team three stepped up to shoot. After a lackluster performance by the first shooter, the second found a rhythm before the third blew the momentum to create a 15 point finish for the team.

Asuar’s first dunk attempt was a miss that set up a two handed windmill dunk on his second attempt. Diboundje was next, missing two between the leg dunks before almost converting it his third go around. The third attempt looked like a between the legs layup, but was enough to give Felton his first shot.

Felton electrified the crowd, setting up 6’9 freshman forward Jaxson Ellingsworth and 7’ Debaut in front of one another to attempt to dunk over them. Felton attempted the shot twice and had the bounce to leap over the top of the big men, but lost control of the ball on both dunk attempts.

Walker was the last one to come through the lineup. His first dunk attempt was the only to go in on the first try, putting the exclamation point on a reverse windmill dunk to bring Ausar back for his second attempt.

Ausar’s second dunk was assisted by Small, who threw the ball off the side of the backboard for Ausar to catch mid-air and slam through the basket. Diboundje came back for his redemption and after missing two more dunks from between his legs, settled for a windmill jam.

Felton was next in line for his second dunk session. After nailing his first dunk with ease, Felton attempted to go between the legs, but lost the ball on the way up. Felton did not let the miss phase him, as he came back to the three point line and took off before leaping in the air and spinning around for the 360 dunk to the crowd’s delight. Minges erupted, leaving only Walker left to go.

Walker started his possession as his two teammates did before him, with a missed dunk between the legs. Walker’s second shot, however, was a huge slam off a windmill tomahawk dunk. The motion made it look like Walker was suspended in air, but it was not enough to rob Felton of his win.

To celebrate the dunk contest victory, Felton set up Debaut just in front of the free throw line and leapt over the seven footer to finish with a one handed dunk before hitting the griddy. Minges lit up at the statement dunk, gearing the fans up for the season to come.

Before the event ended, two more fans were given the opportunity to shoot a half court shot for the $1,000 scholarship. Zachary Ray, fifth year senior double majoring public management and leadership, was one of the students selected.

“I was just hype.” Ray said. “I just wanted to get the crowd hype and get everybody involved. Overall, great time.”

Minges Madness was the inaugural christening for the men and women’s 2022-2023 season. The women will kick the season off in Minges, facing South Carolina State at 6 p.m. on Nov. 7 in Greenville, North Carolina. One night later, the men will play their first game in Minges Coliseum on Nov. 8 at 7 p.m. against Mercer University.

It's really great. Thank you for providing a quality article. There is something you might be interested in. Do you know majorsite ? If you have more questions, please come to my site and check it out!