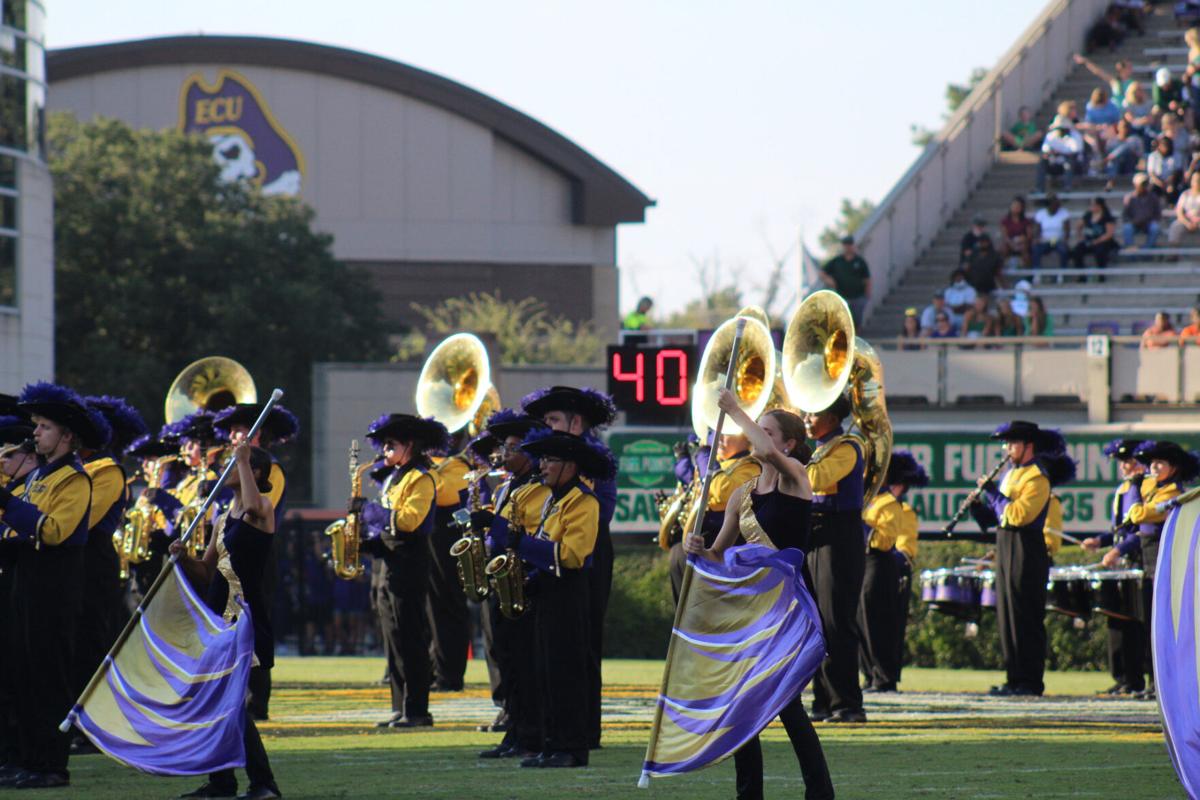 The Marching Pirates and color guard perform during the halftime show at the homecoming football game against Tulane on Oct. 2. 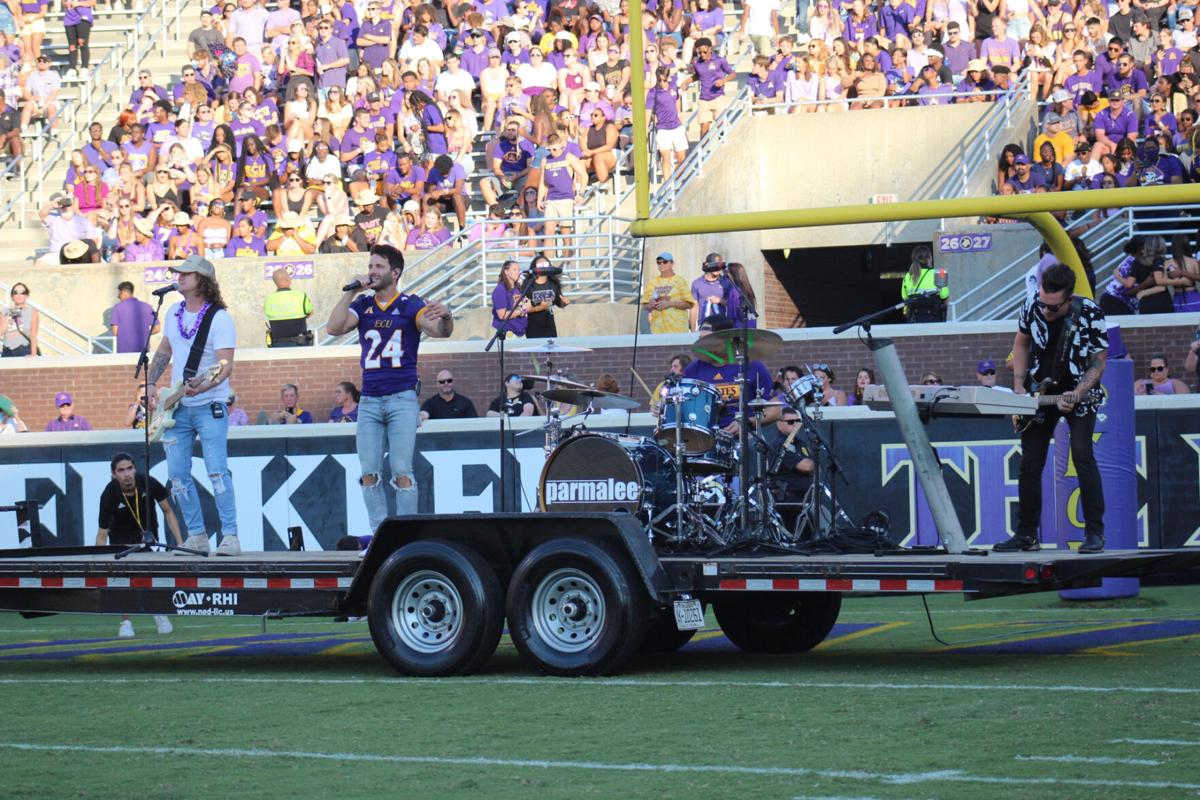 American country rock band Parmalee performs on a platform pulled by a tractor at halftime of the ECU Homecoming football game on Tulane University. 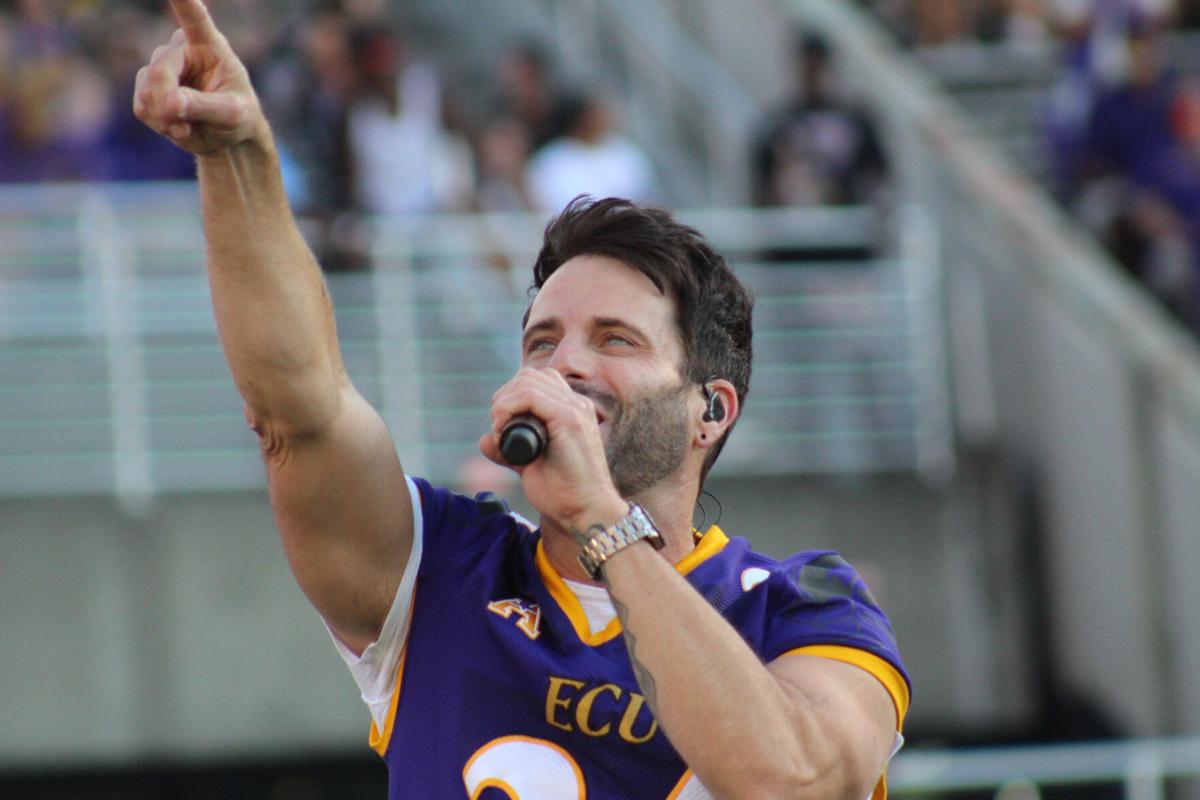 The Marching Pirates and color guard perform during the halftime show at the homecoming football game against Tulane on Oct. 2.

As East Carolina University’s “Back to ECU” Homecoming Week wrapped up on Oct. 2 with its homecoming football game against Tulane University, fans were given a special halftime show which featured American country music band Paramlaee.

The halftime show kicked off with a performance by the Marching Pirates, whose set highlighted classic music from the 1980’s to get the crowd going.

The Marching Pirates performed “Call Me,” by Blondie, “Centerfold,” by The J. Geils Band and “Tainted Love,” by Soft Cell as they made various shapes, such as the outline of North Carolina, with their formations.

The band finished strong with its final outro of ECU’s fight song allowing everyone in the stadium to sing along, as the band slowly started to make its way off the field.

Moving into the rock country portion with band Parlemee, the entire field cleared. The group proceeded to perform on a wooden platform pulled by a tractor in front of the ECU field goal. The first song they performed was “Close Your Eyes For This,” released in 2013 from their studio album “Feels Like California.”

Carmen Ortiz, a sophomore public health major, said she enjoyed the Marching Pirates, ECU’s Dance Team, cheerleaders and Parmalee’s performance at halftime. She said the whole show was a lot of fun.

“I like how they brought out the band from North Carolina as well, they played ‘Carolina,’ that’s one of my favorite songs too. It was really fun to watch,” Ortiz said.

Sophomore nursing major Emma White said she enjoyed the first part of the halftime show, as she likes older music.

White said she came with friends who were a bit skeptical about a country artist performing as that is not their typical genre of choice but they were pleasantly surprised.

“I’m not a fan of country but it sounded pretty fun,” White said. “I liked the band and I liked how much fun my friends were having.”

After the crowd had warmed up they reacted with excitement as the musicians played their final song “Just The Way,” released in 2021 from their album “For You.” The environment was joyful as lead singer Matt Thomas, wearing a white, purple and gold football jersey, sang to the crowd.

Jembeh Wotorson, a sophomore political science major, said she loved Parmalee’s performance. She said she enjoyed all parts of the halftime show and how the band got the fans engaged.

Another aspect of the performance Wotorson particularly appreciated was its connection to North Carolina.

“I really did like the Parmalee halftime, I loved the band and I loved how they got someone from North Carolina to come perform here. I love how we’re like getting in our state values,” Wotorson said.