Skip to main content
You have permission to edit this article.
Edit
Home
About
News
Opinion
Sports
A&E
Classifieds
Advertise
1 of 3 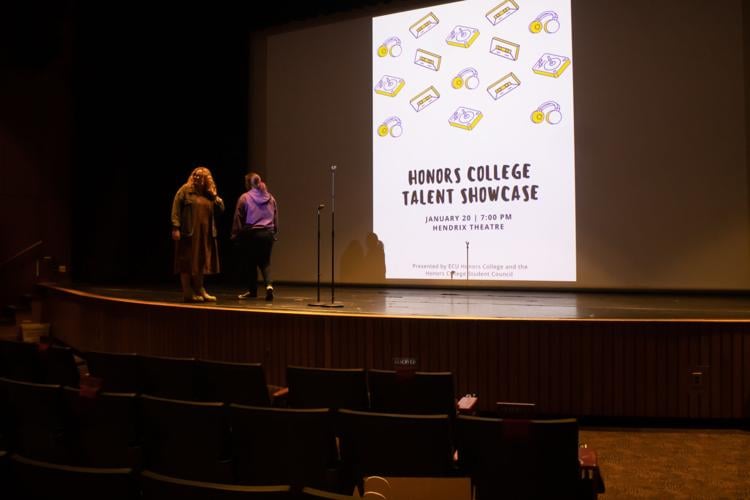 The talent show allowed honors students to showcase their talents outside of academics. 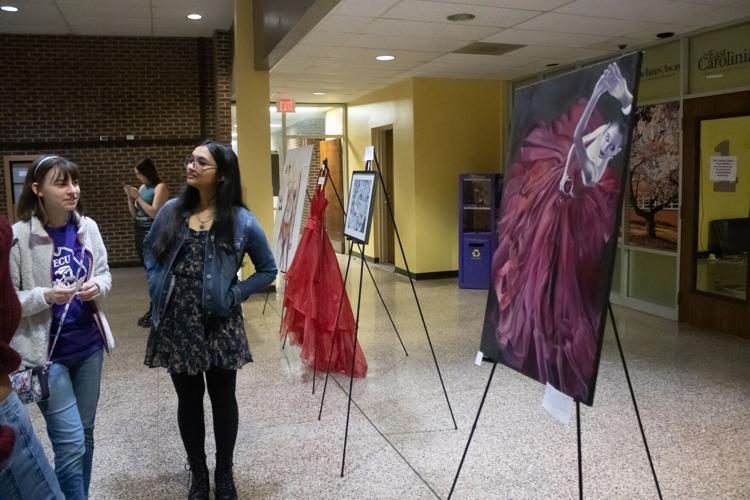 Students browse through the visual arts section of the Honors College talent show. 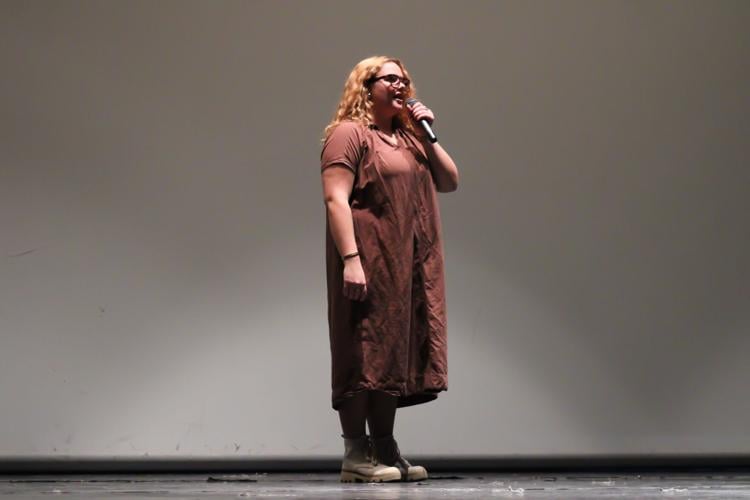 The first-place winner of the talent show Haven Bowers, belts out a song on stage.

A small art exhibit of six art pieces greeted visitors. The art pieces featured oil paintings, a graphite drawing and a red hand-sewn dress. After observing the pieces, visitors lined up at a side table and wrote the number of their favorite piece onto a slip of paper before placing it in a white porcelain skull jar. The visitors were then offered sweet or salty Pirate Popcorn before being directed inside the Theatre.

Senior history major Amrina Rangar, President of the HCSC and one of the organizers of the talent show, said they had a good amount of people in attendance. Many people filled the rows behind the first-row judges and a few people arrived a few minutes after 7 p.m., the official start time of the talent show.

The Magnolia Belles, all wearing matching lavender shirts and black pants, performed the song “Lean on Me” by Bill Withers, enticing the audience to clap along in certain parts of the performance. After giving the Belles a round of applause, the MCs Kasey Perkins and Joanna Mathew introduced the first act, Matt Daughtry, who rapped to a Lo-Fi song, with the audience nodding along.

At the end of his performance, he held the mic up to the applauding audience in a gesture that implied a mic drop. As Daughtry exited the stage, Shaun Gizdic walked on to set up his mic and music stand, joking about the fickleness of the mic’s stability before strumming a chord on his acoustic guitar.

“Tonight, I’ll be playing some original songs for you,” Gizdic said. “The first one is called ‘Jean Jacket,’ and the second is ‘Ghost Town,’ which I wrote before break.”

Gizdic took a sip from his water and played his first romantic song, then his second melancholy song, adding a few notes of a harmonica attached to his ear in-between the lyrics of ‘Ghost Town.’ After another rowdy round of applause, the MCs introduced Ky’Asia Roberts, who performed “When He Sees Me” from the Broadway show “Waitress.”

Unfortunately, Roberts had some technical difficulties that resulted in her mic not working for her whole performance. Despite this, Roberts still powered through the song with her voice ringing out above the music in some parts. Molly Rublewski, a second-year Art Education major, said she was disappointed in the technical difficulties.

“I feel like they should’ve stopped the show to at least fix her mic,” Rublewski said. “If her mic had been working, I think she would’ve won.”

With all the technical difficulties, the crowd gave Roberts a huge round of applause for continuing her performance. After exiting the stage, the MCs introduced the last act, Haven Bowers, who performed “Never Enough” from "The Greatest Showman" movie soundtrack.

After Bowers finished singing and was met with cheers from the crowd, MC Kasey Perkins came onto the stage to settle the crowd.

“And that is why I’m MC’ing tonight and not performing,” Perkins said. “Now, we’ll have the judges decide on the winning act. While they’re gone, if anyone wants to have a quick therapy session, I’m here to talk. I’m not a professional but we can talk.”

The crowd talked amongst themselves after the judges left the theatre to deliberate on the acts. After a few minutes, the judges came back and Dr. Todd Fraley, dean of the Honors College, awarded the art exhibit trophy to Olivia Winter, also a member of the Magnolia Belles.

With a suspended silence, Dr. Fraley announced the second-place winner as Gizdic and the first-place winner as Bowers. All the performers walked off the stage to one final round of applause. The MCs went back on stage one more time to give some parting words to the audience after the 45 minute show.

“We really do appreciate all the performing artists who decided to perform tonight, and all the non-performing artists for their submissions,” Joanna Mathew said. “And, if you have an act you want to do, keep that in mind for next year.”

Do you plan on utilizing the robot delivery systems?