You have permission to edit this article.
Edit
Home
About
News
Opinion
Sports
A&E
Classifieds
Advertise
1 of 7 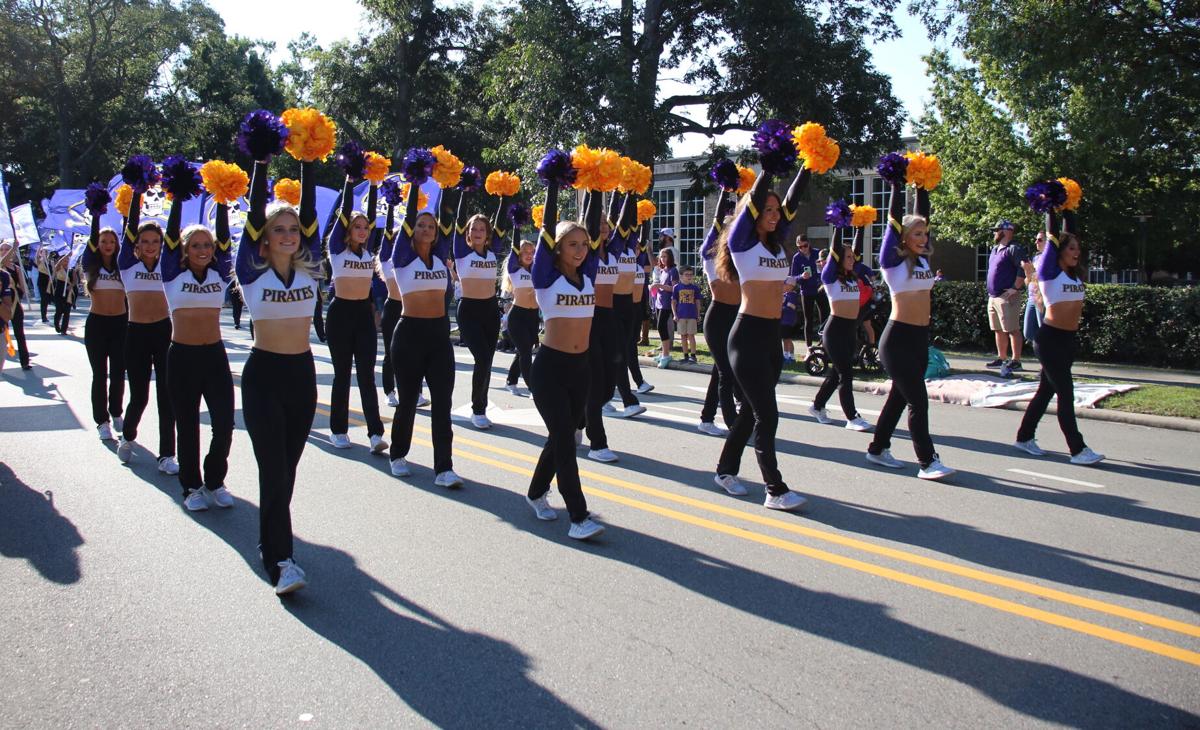 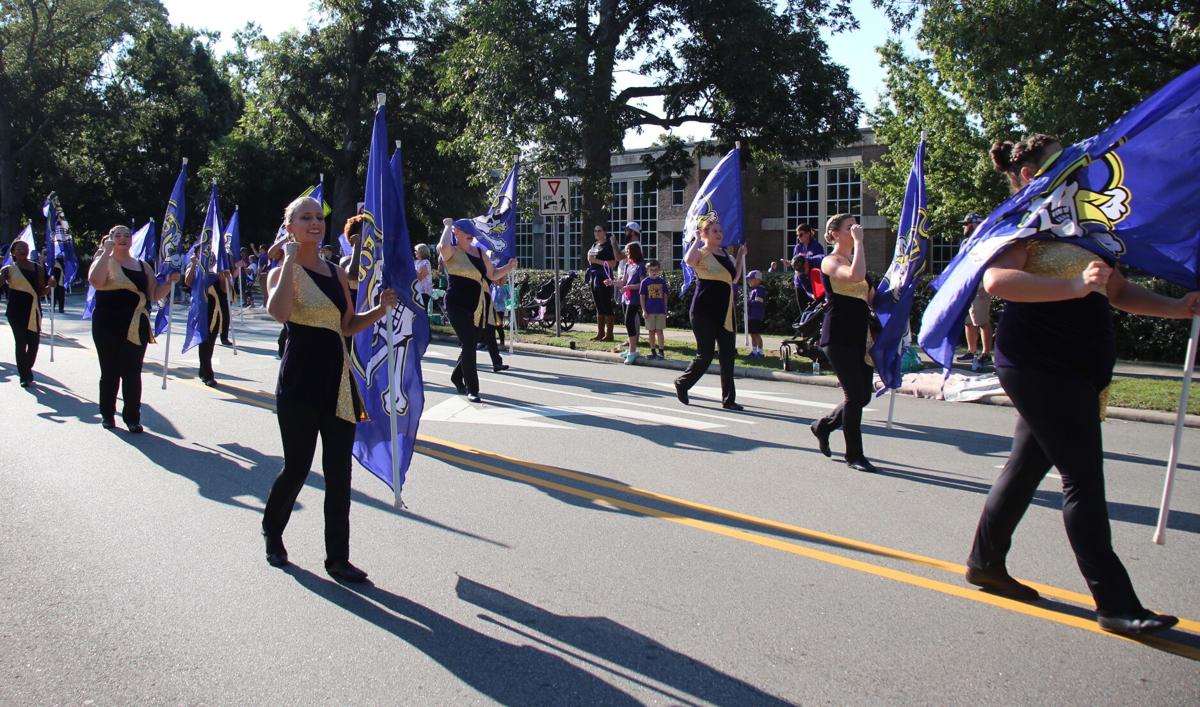 East Carolina University color guard members carry their flags as they walk in the homecoming parade on Oct. 2. 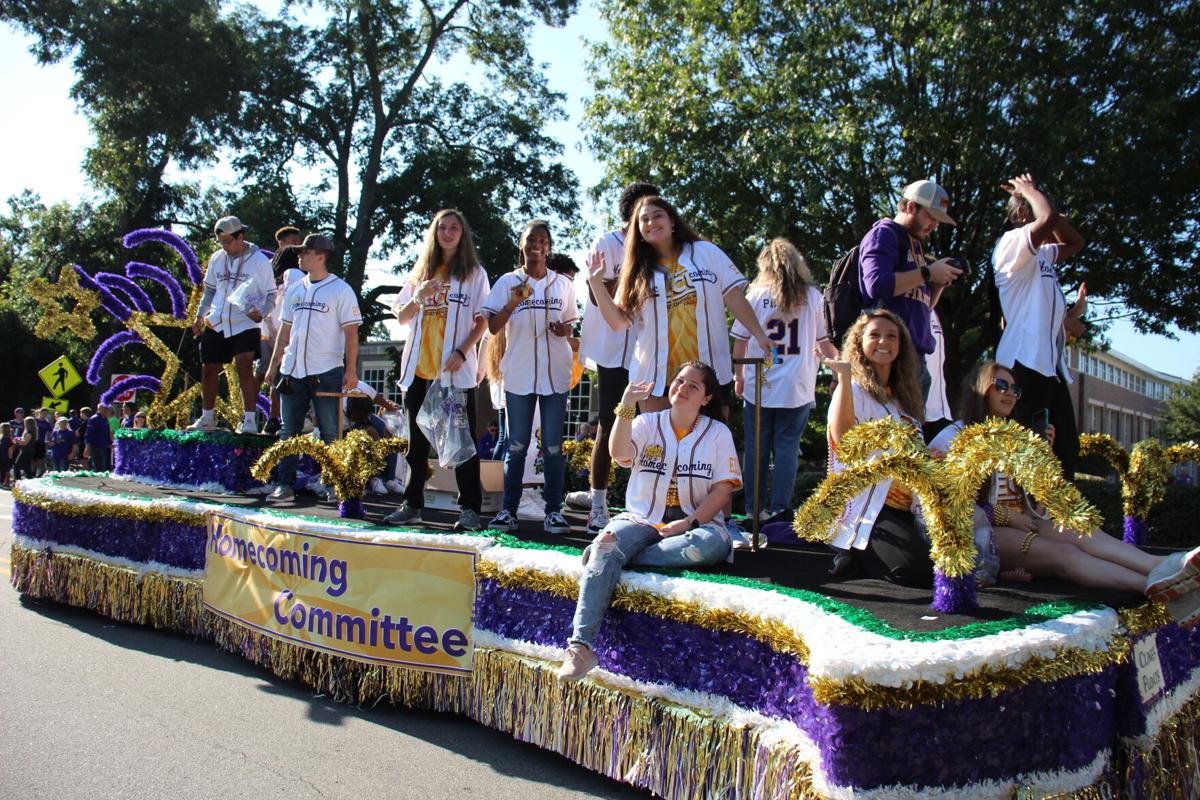 The East Carolina University Homecoming Committee ride their float in the homecoming parade which ran past campus on Fifth Street on Oct. 2. 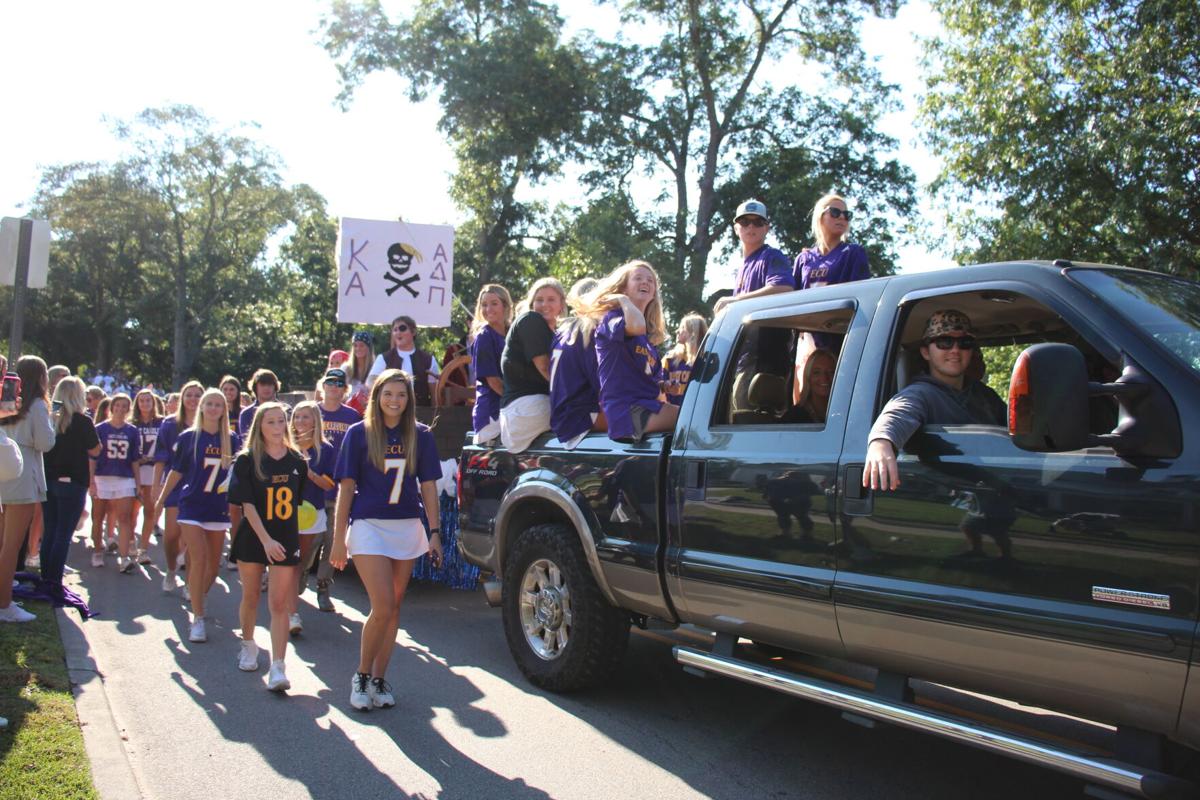 Members of Kappa Alph and Alpha Delta Pi participate in the homecoming parade on Oct. 2. 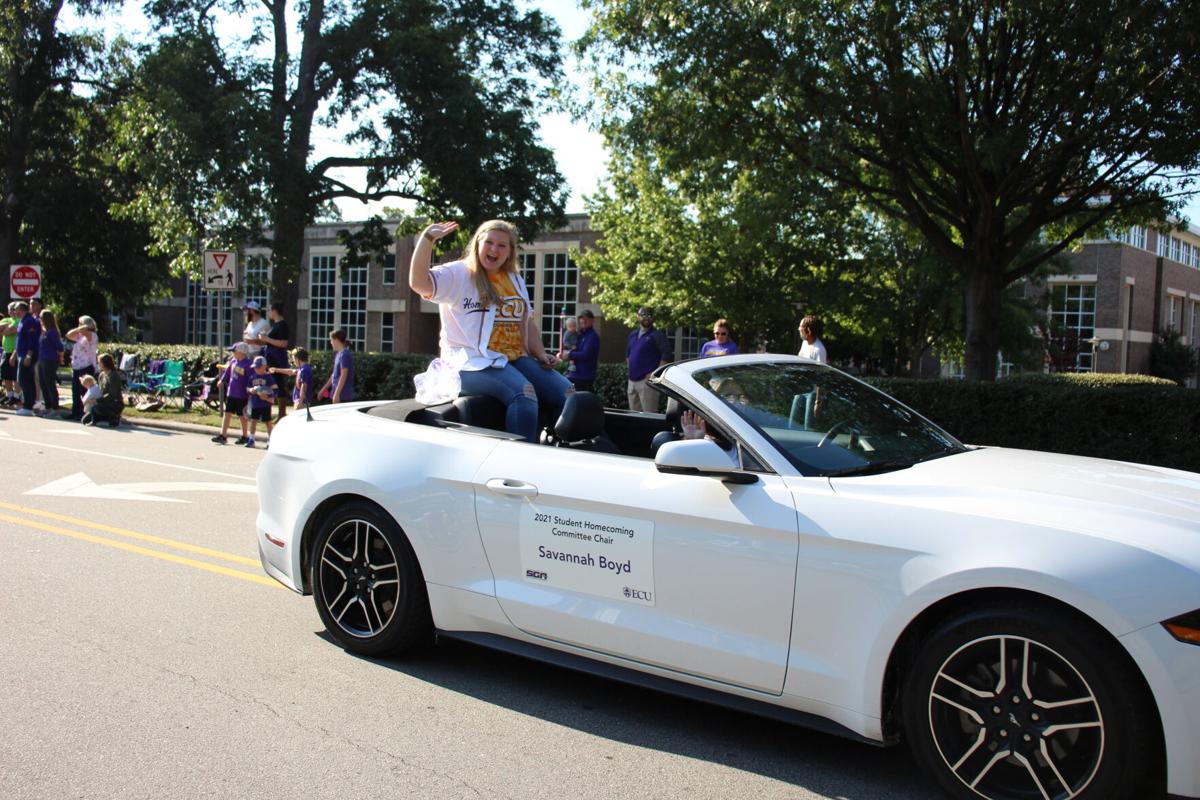 Homecoming Committee chair Savannah Boyd rides in a convertible in the homecoming parade on Oct. 2. 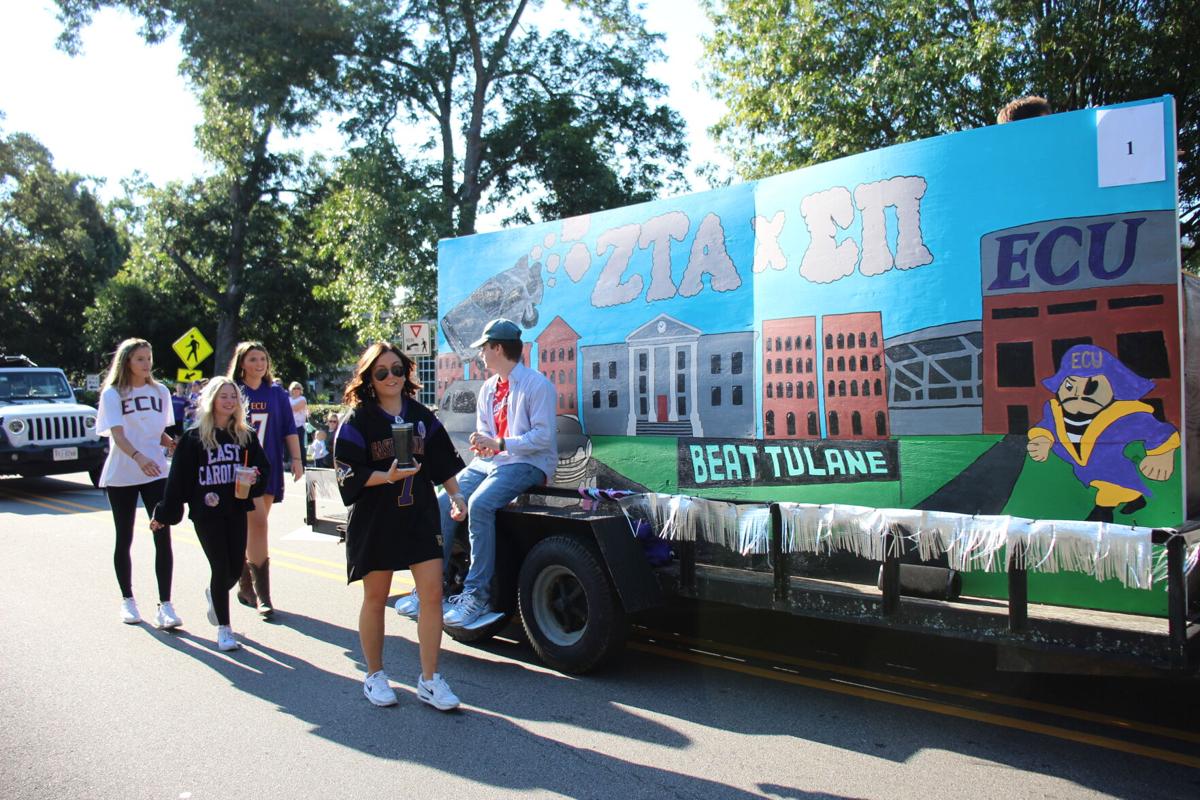 Members of Zeta Tau Alph and Sigma Pi walk alongside their float in the homecoming parade which took place on Oct. 2 before the homecoming football game against Tulane University. 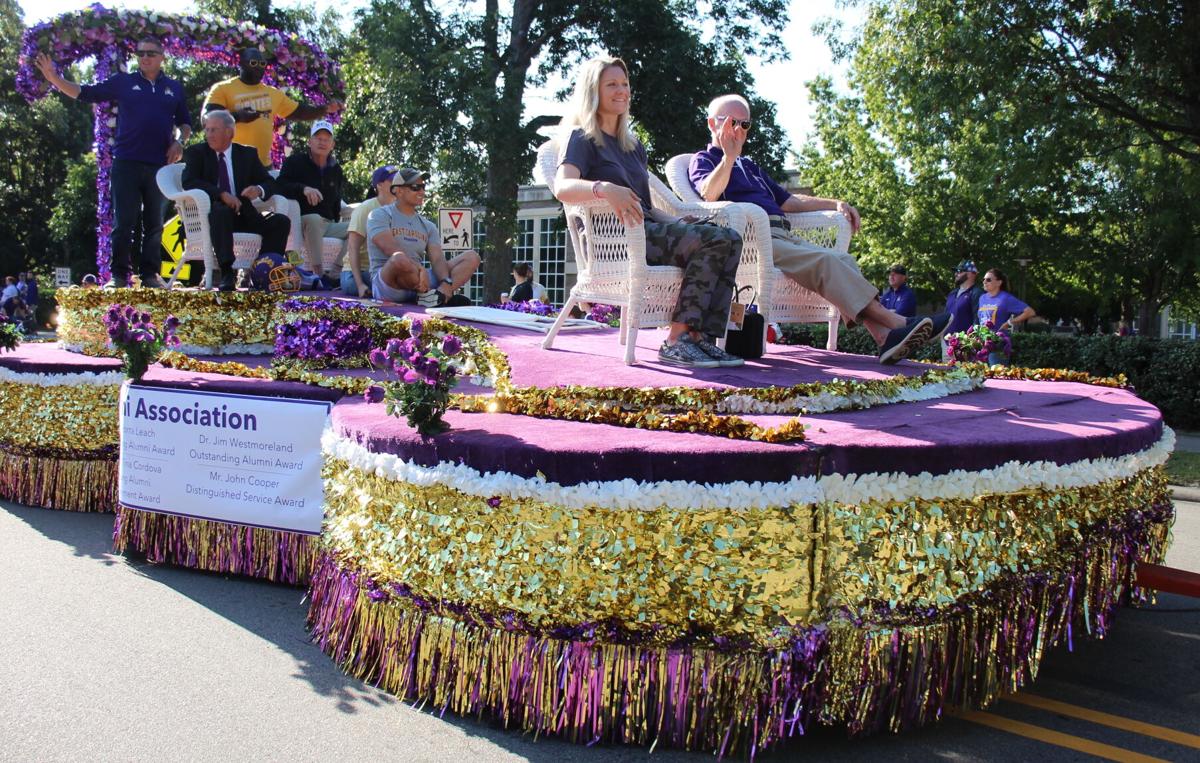 Members of the Alumni Association ride on their float in the homecoming parade on the morning of Oct. 2.

East Carolina University color guard members carry their flags as they walk in the homecoming parade on Oct. 2.

The East Carolina University Homecoming Committee ride their float in the homecoming parade which ran past campus on Fifth Street on Oct. 2.

Homecoming Committee chair Savannah Boyd rides in a convertible in the homecoming parade on Oct. 2.

Members of the Alumni Association ride on their float in the homecoming parade on the morning of Oct. 2.

East Carolina University kicked off its final day of the 2021 Homecoming Week with a parade along Fifth Street from Hilltop Street to Evans Street on Oct. 2 where floats from student and community organizations represented the homecoming theme, “Back to ECU.”

The parade commenced with this year’s grand marshal, campus health care workers and finished off with ECU Transit. Other participants included competing and non-competing organizations, Sorority and Fraternity Life and walking groups such as Greenville dance studios, high school bands, fire trucks, ECU’s Marching Pirates and the top 10 Captain of the Ship nominees.

Opening up the parade was a motorcycle police escort followed by the Air Force ROTC Detachment 600 from ECU. Some of the members were in full uniform while others walked behind in more casual uniforms.

Following the ROTC was the 2021 Grand Marshal ECU Healthcare Heros riding a silver, purple and gold float. The float was decorated with purple and white stars with plenty of candy to throw to the crowd.

Members of the community, young children, ECU students and alumni were present. Floats could be seen throwing beads, lollipops and other small candies to the crowd.

Kendra Davis, one of the many attendees, was excited on the fall morning waiting to see some familiar faces in the parade.

Not all groups were just passive onlookers though, some people came to support family and friends in the parade. Filled with excitement and anticipation as the floats, cars, bands and dancers went by, some patiently waited to see their own stars.

Community member Holly Alligood said it was the first time she had attended an ECU Homecoming parade and it was nice to see so many other people out and about.

The portion of the parade Alligood said she was most looking forward to seeing was Miss ECU and the Captain of the Ship nominees as she has personal connection to each of them. She said her friend’s girlfriend is one of the current Miss ECUs.

“We have another student we are familiar with that was nominated for Captain of the Ship so we’re excited about seeing her too if they’re part of the parade,” Alligood said.

The Captain of the Ship candidates rode in Jeep Wranglers and could be seen waving through the open tops of the vehicles. Candidates threw candy to the crowds in addition to greeting them. Other participants such as police, cheerleaders, a purple and gold firetruck and ECU’s mascot PeeDee the Pirate were present.

Femi Wilson, sophomore political science major, said she had her first experience at ECU’s homecoming this year. New to the area and unfamiliar with traditions due to COVID-19 restrictions in 2020, she said this was a morning of new experiences.

“I think it's good, it's my first one actually. I haven’t seen anybody I know but the dance team and cheerleading was exciting,” Wilson said.

Homecoming Committee parade lead Grace Faller said in an interview prior to the event that after obtaining a permit to hold the parade on Fifth Street, the homecoming committee reached out to Greenville organizations and companies to participate in the parade.

“(We reach out to) anyone outside of the ECU community that would like to participate because while this is an ECU event we really like to pull the community in, it’s important,” Faller said. “It is judged by faculty and staff.”

Faller said judging is based on the floats' relevance to the homecoming theme as well as participation and enthusiasm. She said the homecoming committee worked to encourage participating organizations to have representatives walk alongside their floats to help show spirit.

Judges conduct a walkthrough of the floats prior to the parade, Faller said. She said the type of float that usually wins the parade competition goes hand-in-hand with the spirit each organization brings with their float as it goes down Fifth Street.

Faller said the homecoming parade sees a lot of attendance from the Greenville community and ECU alumni.

“I think the community also gets excited for this event as well,” Faller said. “Alumni, they’re always so excited to come back. I mean the parade’s a staple, it’s tradition.”