You have permission to edit this article.
Edit
Home
About
News
Opinion
Sports
A&E
Classifieds
Advertise
1 of 6 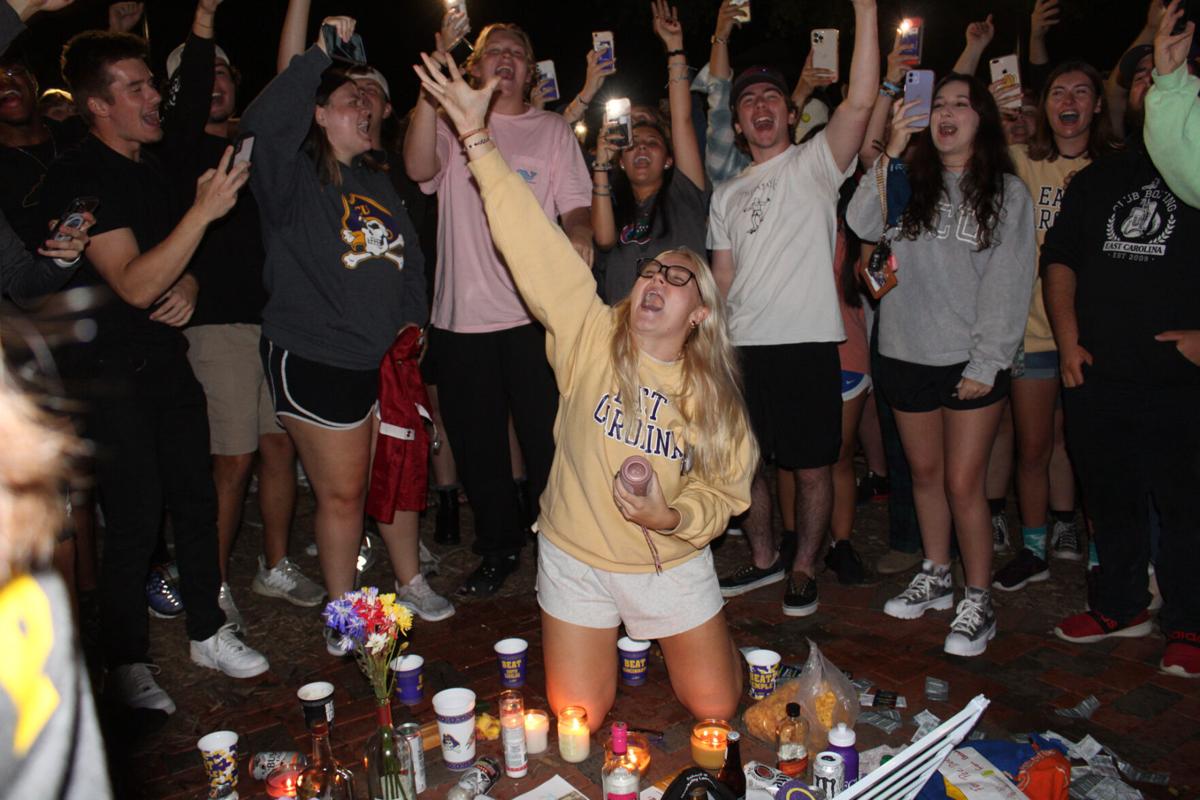 East Carolina University students gather around the location of the PeeDee statue on Oct.3 for a memorial of the statue which was vandalized. 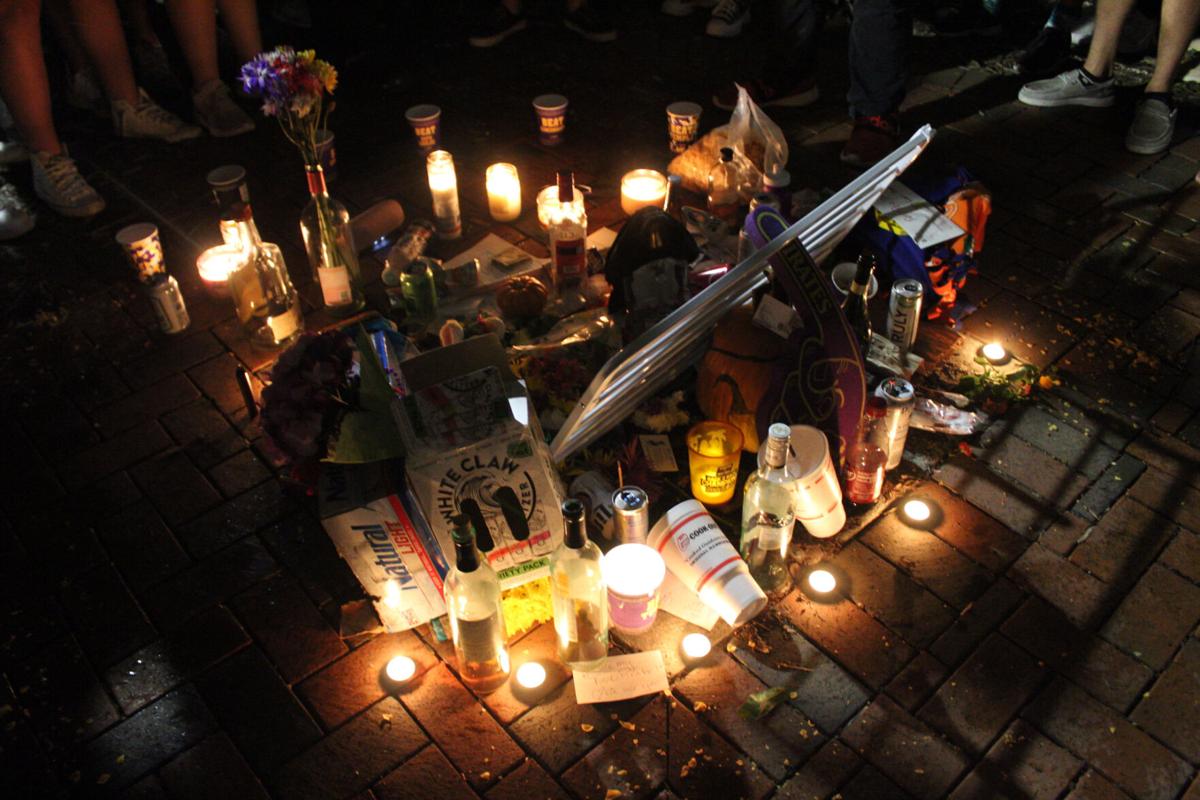 East Carolina University students present at the memorial laid out candles, alcohol, food and other ECU related memorabilia on the site of the PeeDee statue. 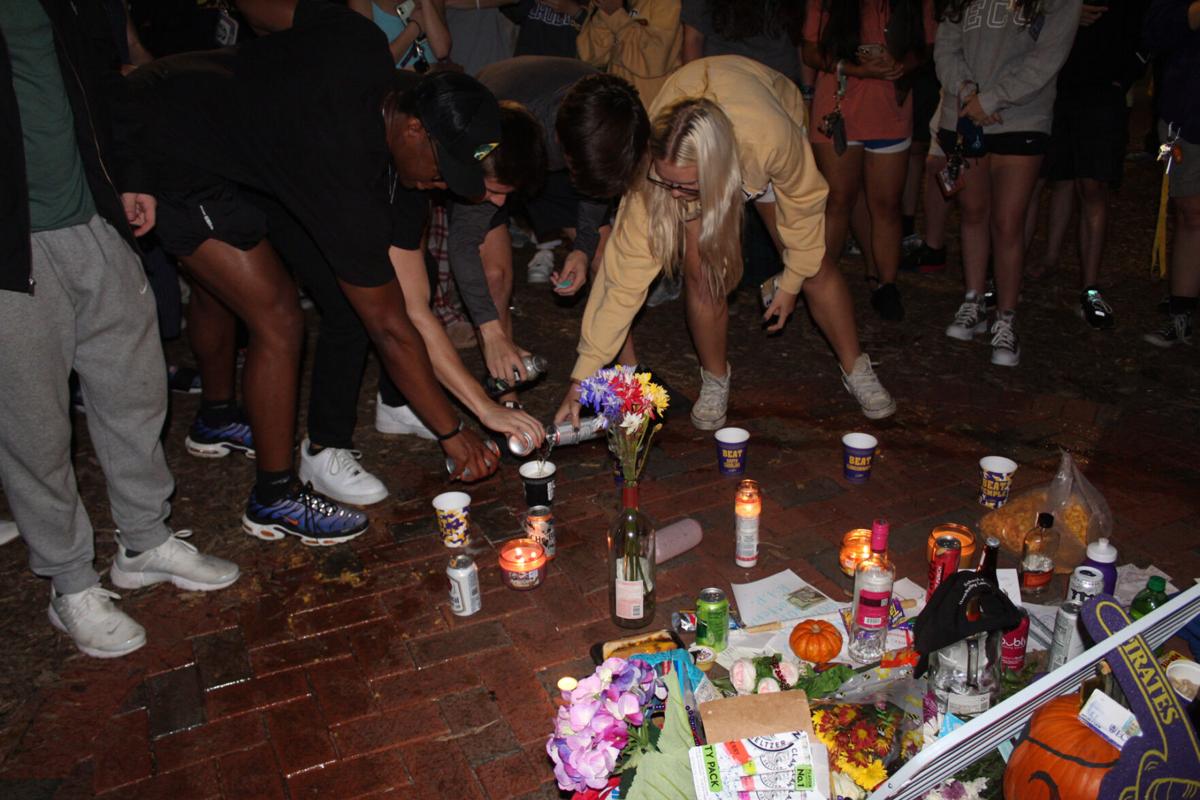 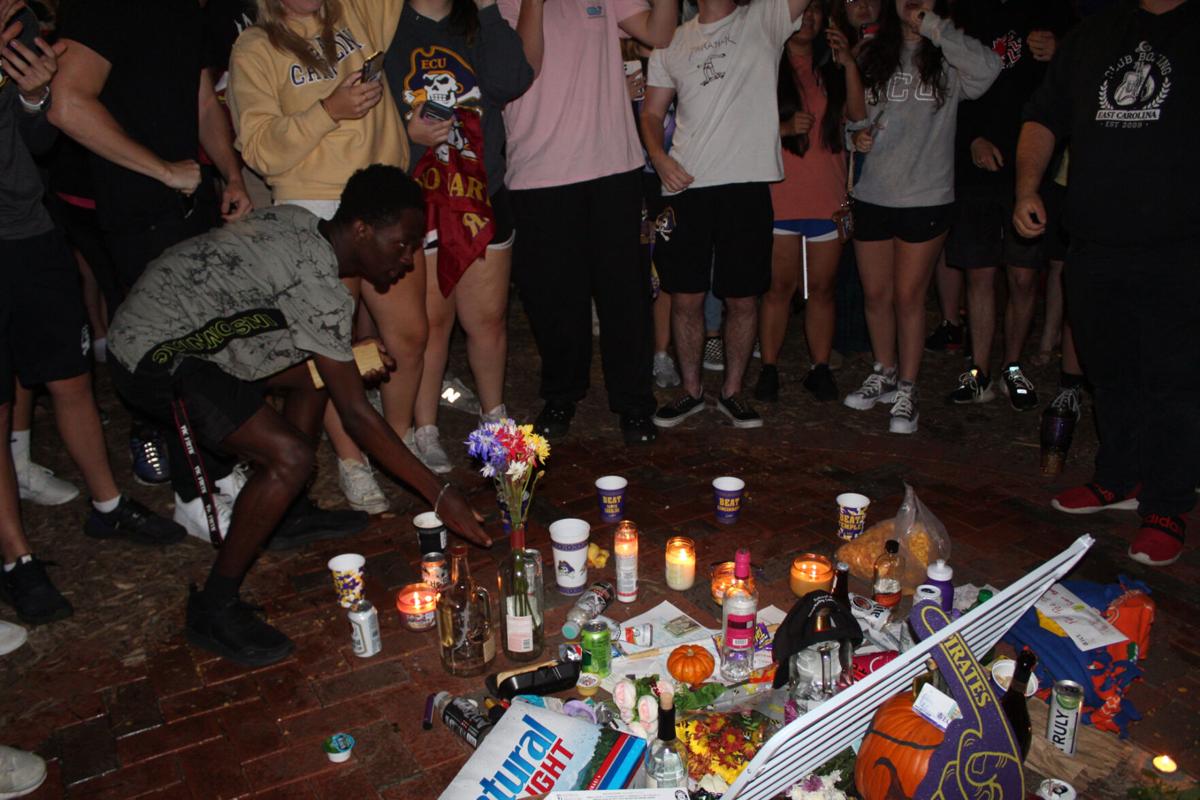 ECU students begin laying out various memorabilia on the site of the PeeDee statue. 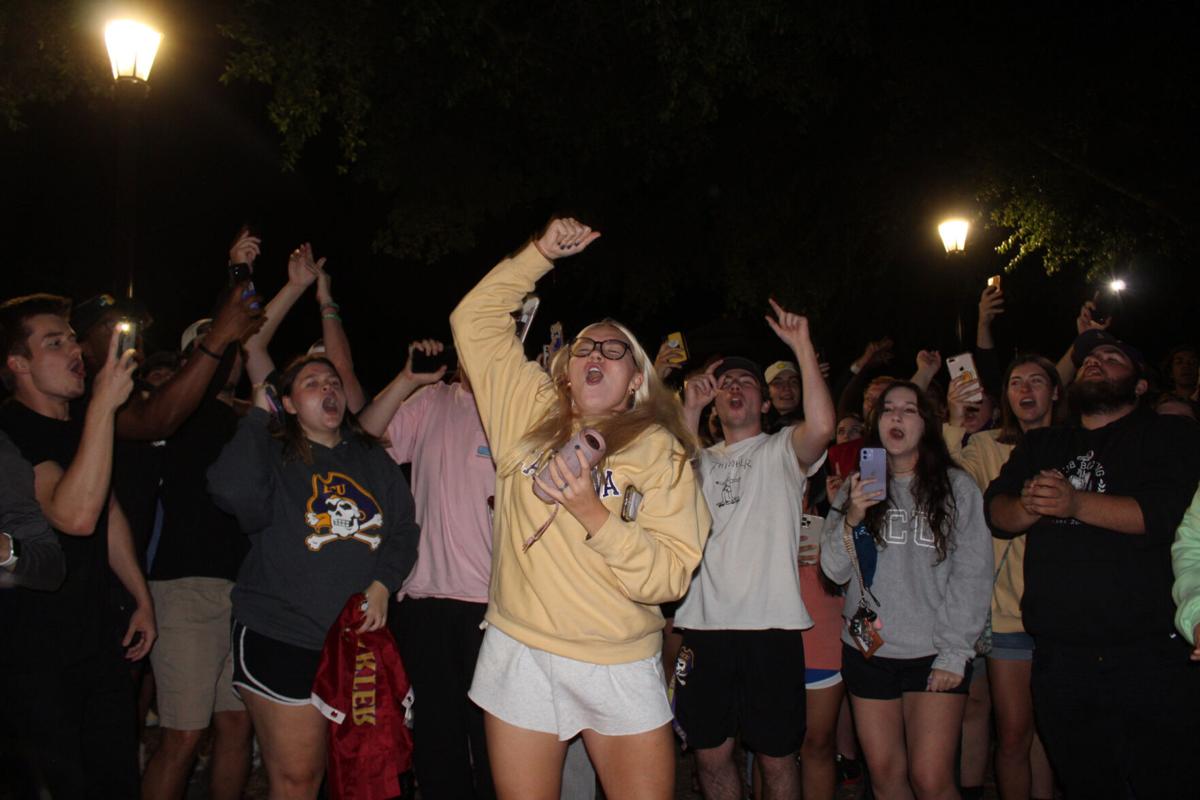 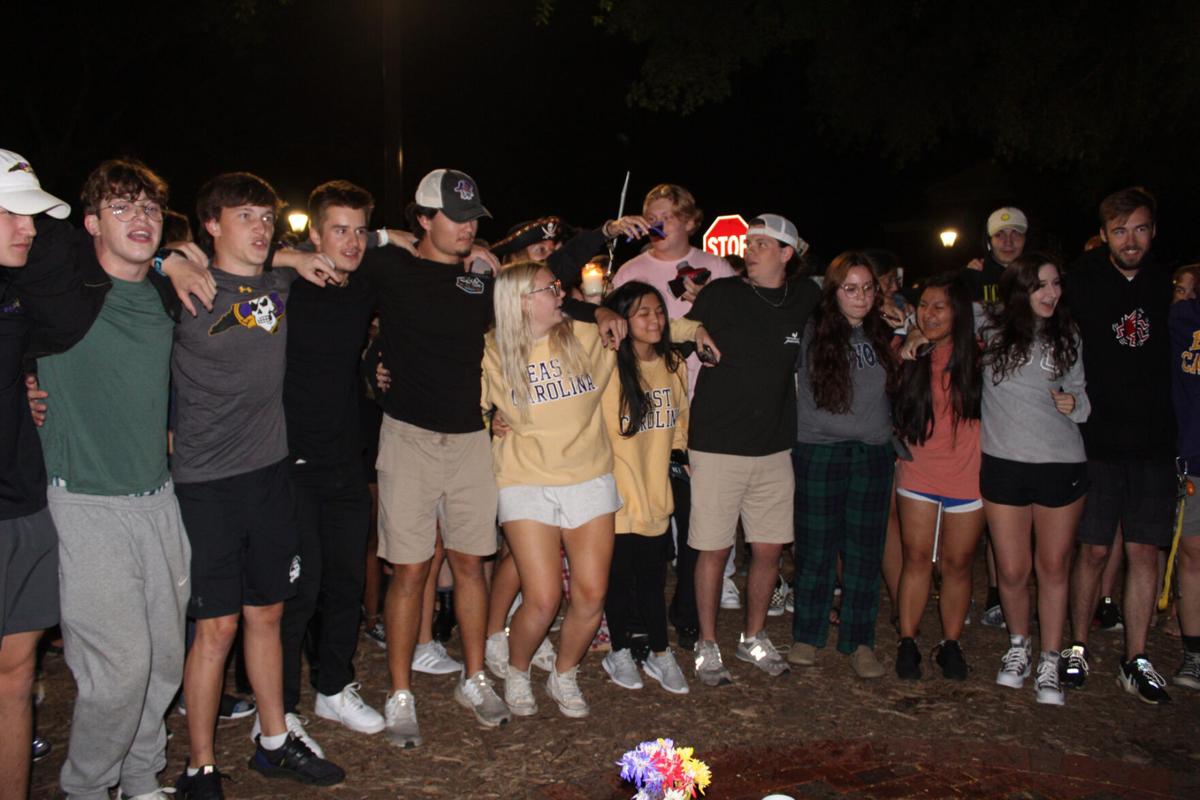 ECU students congregate around the PeeDee statue memorial singing ECU game-day favorites such as “Livin’ on a Prayer” and the ECU alma mater.

East Carolina University students gather around the location of the PeeDee statue on Oct.3 for a memorial of the statue which was vandalized.

East Carolina University students present at the memorial laid out candles, alcohol, food and other ECU related memorabilia on the site of the PeeDee statue.

ECU students begin laying out various memorabilia on the site of the PeeDee statue.

ECU students congregate around the PeeDee statue memorial singing ECU game-day favorites such as “Livin’ on a Prayer” and the ECU alma mater.

A wave of East Carolina University students met at the site of the now-removed PeeDee the Pirate Statue at midnight on Oct. 3 to memorialize the fallen statue.

Various songs, game-day favorites such as “Livin’ on a Prayer” and the ECU alma mater were loudly sung as students expressed their love for the PeeDee statue. Some students from the crowd said the memorial was a “celebration of life” more so than a time of grieving.

Ethan Brooks, a sophomore business major at ECU, came with flowers and lit candles to pay respect to the fallen mascot. Brooks said he was repulsed when he heard about the vandalism.

“I was shocked, but I wasn’t surprised because I heard rumors that they (the vandal) was from NC (North Carolina) State (University),” Brooks said.

Accompanied by friends at the memorial, Brooks said he hopes Efe Mert Erdem, the alleged vandal, receives an appropriate and justified punishment for his act. He said the defacement was horrible and is a true depiction of the person's character.

Brooks said he was there to express his school pride and his support to ECU’s mascot. He said the amount of students at the memorial mirrored the spirit of the university quite well.

University officials should replace the statue, Brooks said. He said with all the student support gathered there, something should be given back to the student body for their efforts to memorialize the fallen statue.

“It just shows that we really care about our school and our mascot, the things we hold sacred,” Brooks said.

Students laid no-quarter flags, bouquets of flowers, drawings, pictures, alcohol containers and candles out where the statue stood on central campus, outside of Cotton Residence Hall.

Sophomore criminal justice major Alexis Wolanzyk said she was upset when she heard the statue was torn down. She said the statue was a part of who she is as an ECU student and to have it removed is such a disappointment.

Wolanzyk said she attended the memorial because her friends were going and she wanted to show respect to the statue. She said PeeDee the Pirate is a big part of ECU’s campus culture, so she felt she needed to be there.

“It (the PeeDee the Pirate statue) symbolizes our unity. We’re a pretty close-knit college, we all have fun, and we all are friends,” Wolanzyk said.

Jamal Alston, freshman music major, said he was surprised to see the amount of people who attended the memorial, and was more surprised about the statue’s removal.

Alston said even though he has not been at ECU for long, he knows how significant PeeDee the Pirate is to the university. He said the statue’s significance is something everyone on campus can appreciate.

Alston said he was angry when he heard about the vandalization. He said he hopes with the support shown at the memorial, university officials will replace the statue because he claims that a piece of ECU is missing without the statue of PeeDee the Pirate.

“Other than the land itself, PeeDee was the second most important thing to East Carolina University,” Alston said.

The crowd muttered rumors of a noise complaint and East Carolina University Police Department (ECU PD) took action to vacate the area on central campus. At 12:20 a.m. the crowd quickly dispersed as campus police officers mandated that students leave the area. Two officers at the scene declined to give comment.

Students who earlier chanted “love and praise,” shouted “scatter” as the large group ran from the scene.

Alyssa Clark, a freshman nursing major and Cotton Hall resident said the past two nights were eventful for her. She said she came across the broken PeeDee the Pirate statue when his arm was missing on Oct. 2. She heard the memorial outside of her window and decided to see what it was about.

“The candles and the ECU attire can be and should be left there,” Clark said. “It symbolizes us (ECU students).”

As a Cotton Hall resident, Clark said she agreed with ECU PD when they told people to leave. She said on a Sunday night at midnight, people should be able to rest without a bunch of commotion outside of their windows.

On the other hand, Clark said the memorial was a symbol of ECU pride. She said the memorabilia should be left until campus officials are able to repair or replace the statue.