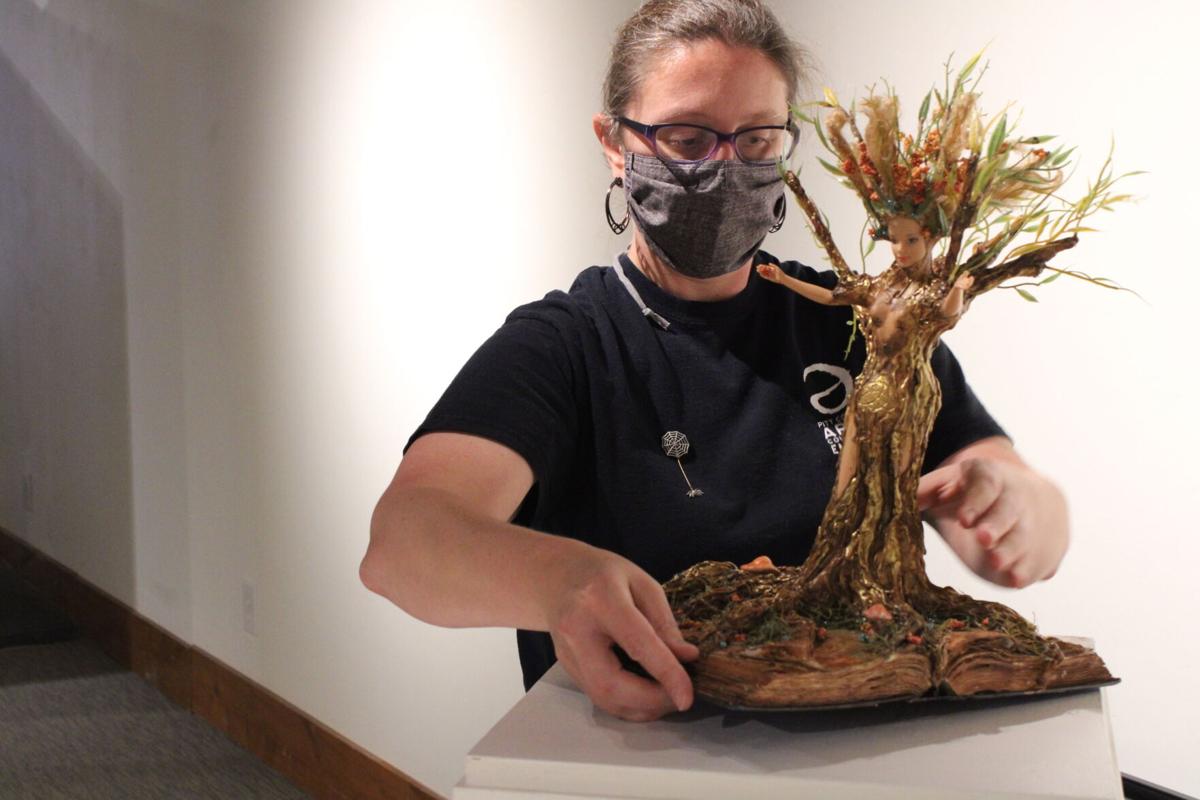 Marketing and Exhibits Coordinator at Emerge Gallery and Arts Center Sarah Lazure sets Nancy Winn's piece "The Legend of Barbie and the Druids on a pedestal in the gallery. 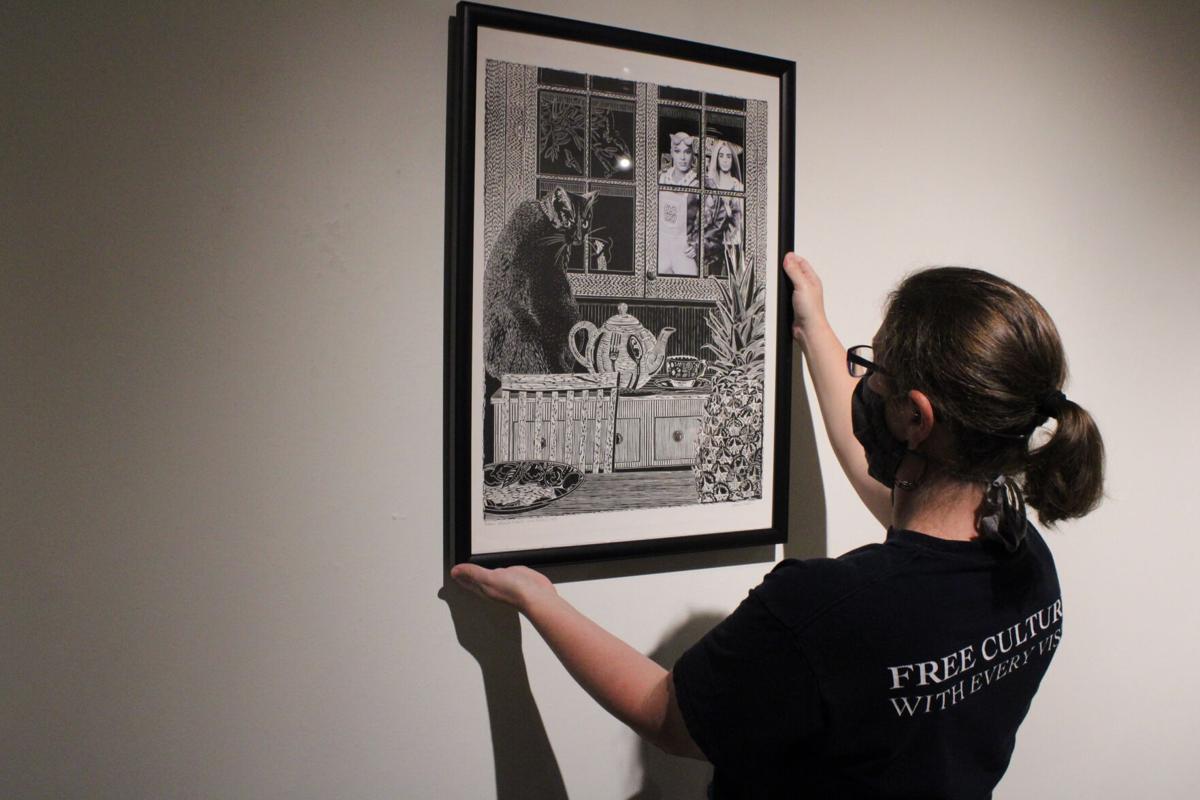 Marketing and Exhibits Coordinator at Emerge Gallery and Arts Center Sarah Lazure hangs Catherine Walker's "Barbara Millicent Robert (aka Barbie), 1959" on the wall in the gallery. 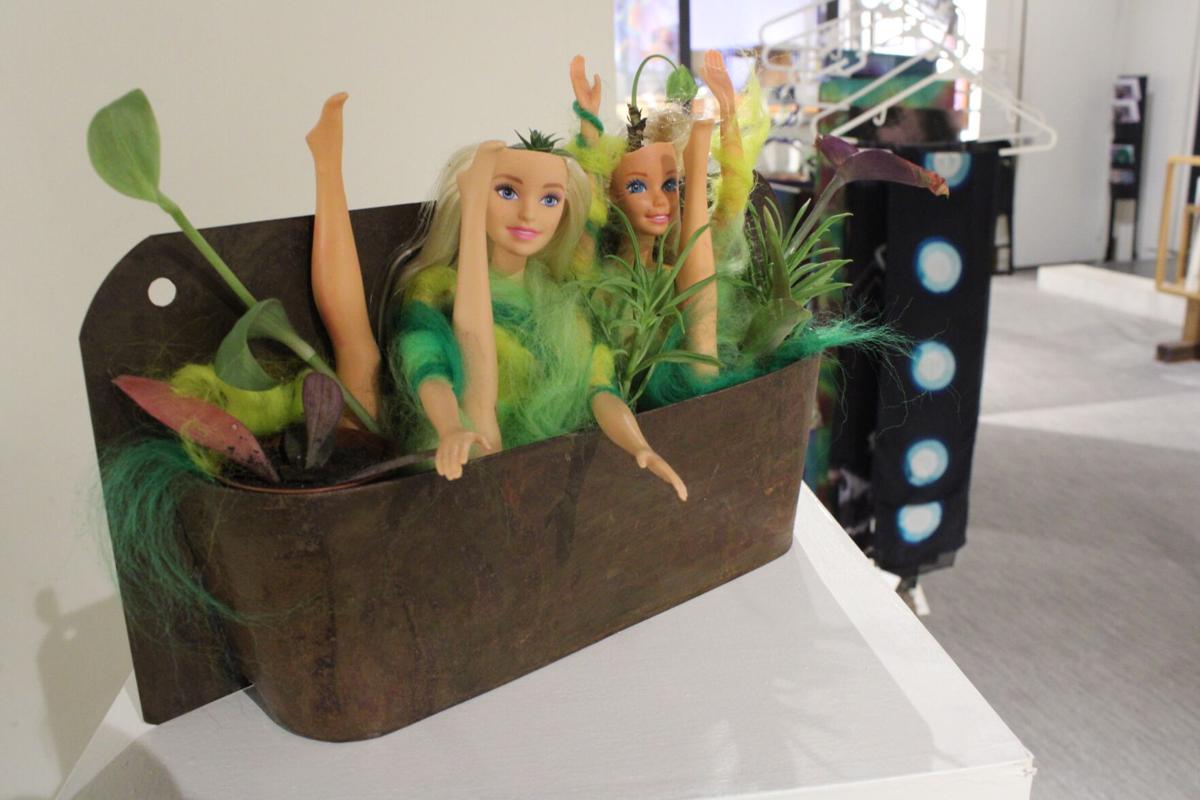 "Welcome to the Jungle," by Marketing and Exhibits Coordinator at Emerge Gallery and Arts Center Sarah Lazure sits in on a pedestal in the gallery for the Odd Barbie Show. 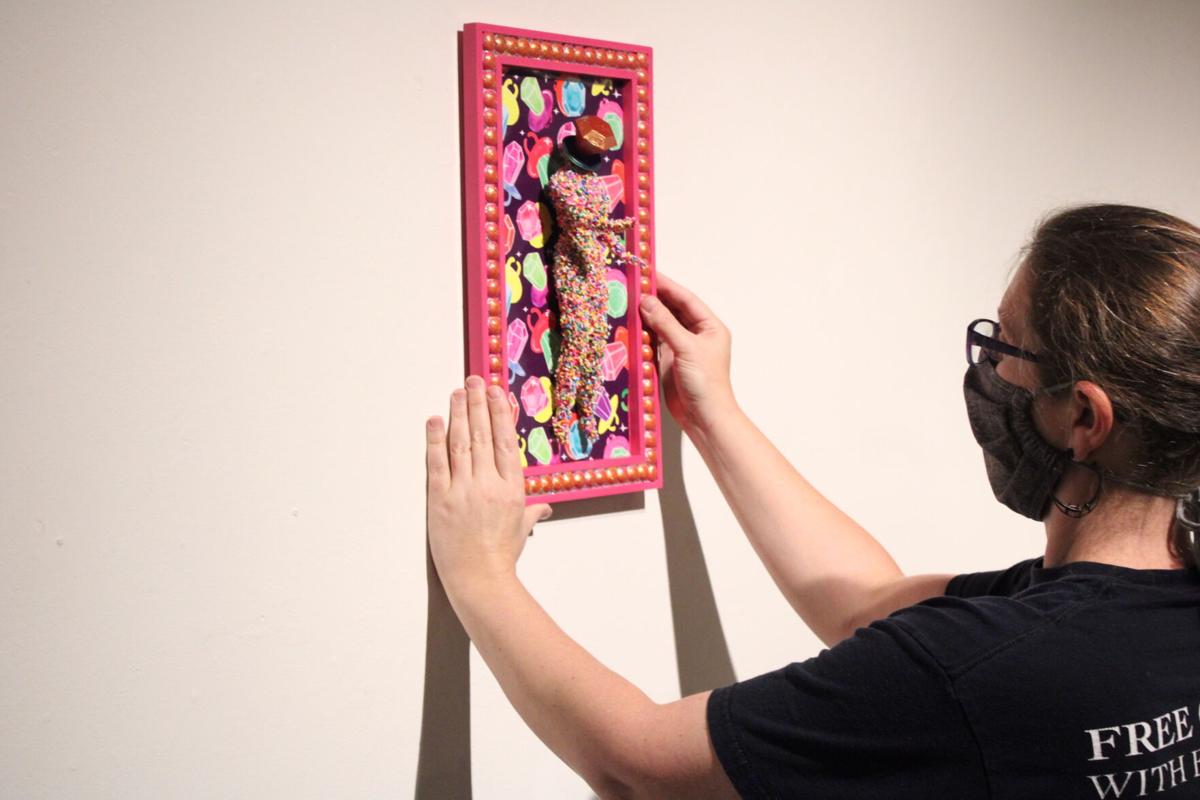 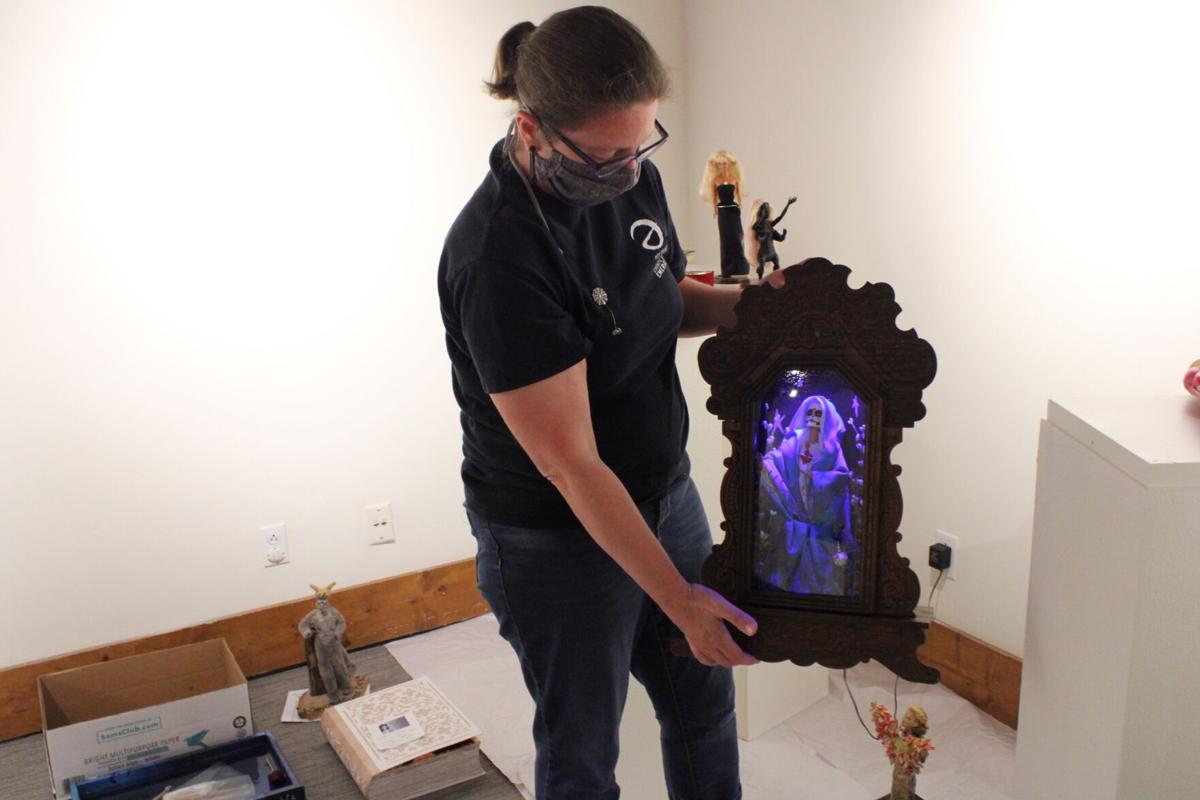 Marketing and Exhibits Coordinator at Emerge Gallery and Arts Center Sarah Lazure sets Nancy Winn's piece "The Legend of Barbie and the Druids on a pedestal in the gallery.

Marketing and Exhibits Coordinator at Emerge Gallery and Arts Center Sarah Lazure hangs Catherine Walker's "Barbara Millicent Robert (aka Barbie), 1959" on the wall in the gallery.

"Welcome to the Jungle," by Marketing and Exhibits Coordinator at Emerge Gallery and Arts Center Sarah Lazure sits in on a pedestal in the gallery for the Odd Barbie Show.

Barbie is dismantled, disfigured, reconstructed and totally reimagined in Emerge Gallery and Art Center’s Odd Barbie Show fundraiser which will be held from Nov. 5 to Nov. 29, with a reception taking place on Nov. 5 at 5 p.m. at Emerge.

Sarah Lazure, marketing and exhibits coordinator at Emerge, said for this show, around 10 years after the last Odd Barbie show took place, artists were tasked with creating works of art that are “Barbie centric” and were given the freedom to take that prompt in any direction they chose. More than 50 artworks will be displayed at Emerge for viewing during the gallery’s regular hours, while the fundraising portion of the event will take place online.

Each piece in the show will be auctioned on Emerge’s website throughout the month, with bids starting at $25 and increasing in $10 increments. There is also a “buy it now” option for each Barbie and all profits will benefit Emerge’s education fund. Lazure said the Barbie show was started in 2002 and required artists to incorporate a whole physical Barbie doll into their pieces, however, this year the requirements were relaxed.

“Thinking of how entwined the Barbie is in our culture, how do we as artists use that as a platform for conversation? Whether that’s just a fun conversation or it's political or environmental or gender specific, things like that,” Lazure said. “I think it's a wonderful platform that we can all start with the same image in our head and then what happens.”

For people who may not generally attend art exhibits, Lazure said this one would be a good place to start. She said the exhibit is engaging and fun and shows how many different ways people think about Barbie. She said people should bid on the Barbies as a way to support the arts while receiving a piece of art in return.

Not every piece in the exhibit was submitted by an artist. One piece in the show, titled “Shipwrecked Barbie, Plastics in the Sea,” was created by Associate Professor and Chair of the Department of History at East Carolina University Jennifer McKinnon. Her piece is a glass bottle, filled halfway with what looks to be murky, sandy water that is littered with pieces of glass, coral and a mostly buried Barbie doll.

“It has that commentary about what we’re doing to the ocean and of course Barbie herself is plastic, so what happens to all those Barbies that get thrown away,” Lazure said.

McKinnon, who teaches maritime studies at ECU, said she excavates shipwrecks and she finds toys and pieces of plastic when she dives to sites underwater. She said she connected these experiences with her enjoyment of ships in a bottle when she created her piece.

The Barbie in McKinnon’s piece is made of recycled ocean plastic and is modeled after a shipwreck off the coast of the Florida Keys that she excavated, she said. She said she was excited to submit a piece after being invited to by a friend.

“I knew I could combine a theme with my background and I like working with bright colors and so the corals were really fun,” McKinnon said. “Just trying to think of the different corals that I see underwater and then recreating them by hand was kind of fun.”

McKinnon said she has never had a piece of art in a show before. She said she creates pretty regularly for herself, family and friends at home but she is looking forward to having a piece that will be viewed by the public.

As her son spends his summers in Emerge’s art camps and she has friends who work at the gallery, McKinnon said she is excited to be able to contribute to Emerge. In addition to its support of the arts, she said she believes the theme of the show is valuable as well.

“Barbie is iconic in many ways and I think the description of the show being Odd Barbie and sort of how Barbie has and has needed to change over time is important to think and recreate Barbie in our imagination,” McKinnon said.

Curator of the Wellington B. Grey Gallery, Maria Modlin, said she was involved in the original Odd Barbie shows in various ways but had not submitted a piece in years past. The piece she submitted this year, “Garden Fairy,” was meant to be a garden nymph and features a Barbie dressed in leaves and flowers. She said braiding and coiling the Barbie’s hair with ribbon for the headpiece was the most time consuming element of the piece.

Modlin said the intriguing quality of the Odd Barbie show has the potential to draw in people who wouldn’t normally attend an art exhibit out of sheer curiosity. She said the event is a good fundraiser as it sees a large turnout from the community. She said people should see the show and bid on Barbies not only to help Emerge, but to broaden their own horizons.

“It really does help your imagination when you’re looking at these pieces because you get to see the way the artists transform them, but it also gives other artists or other people different ideas and you don’t have to be an artist to do stuff like this,” Modlin said.