Skip to main content
You have permission to edit this article.
Edit
Home
About
News
Opinion
Sports
A&E
Classifieds
Advertise
1 of 7 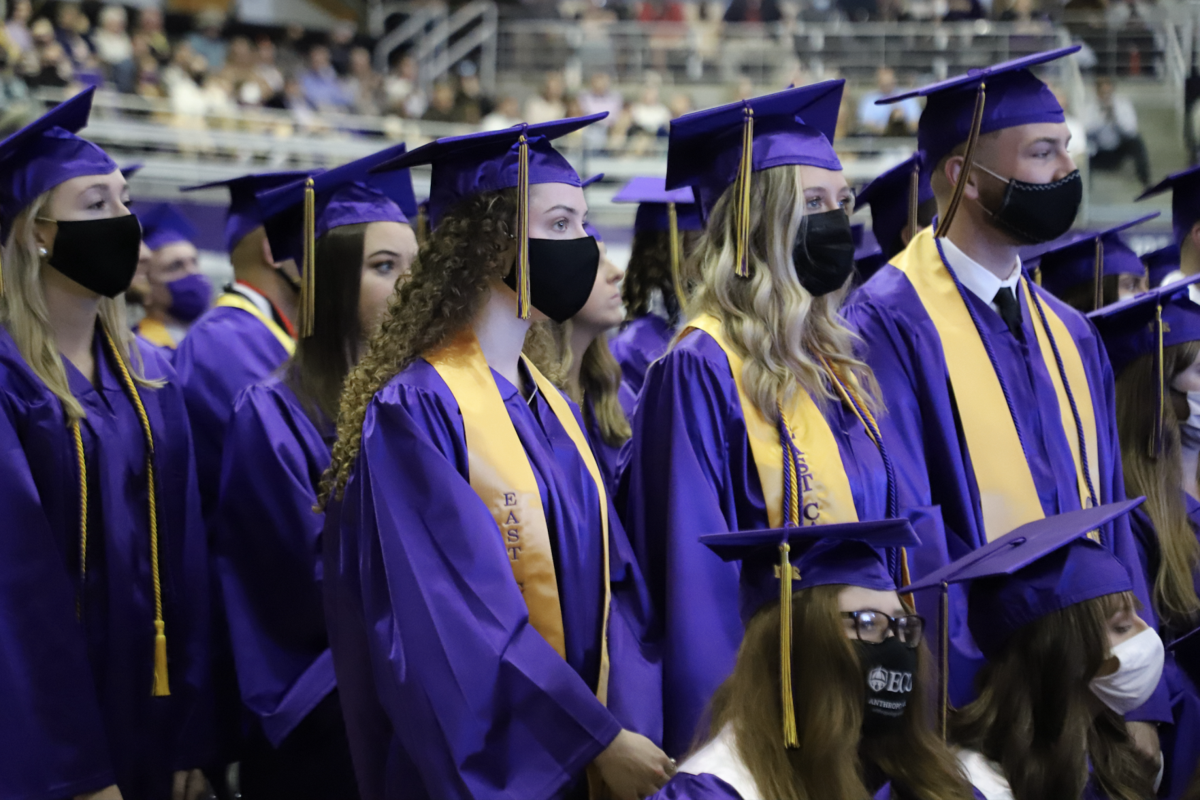 East Carolina University’s fall commencement ceremonies were held in person at 9 a.m. and 1 p.m.  where faculty, staff and loved-ones gathered to celebrate the accomplishments of the fall class of 2021 on Dec. 17 in Minges Coliseum. 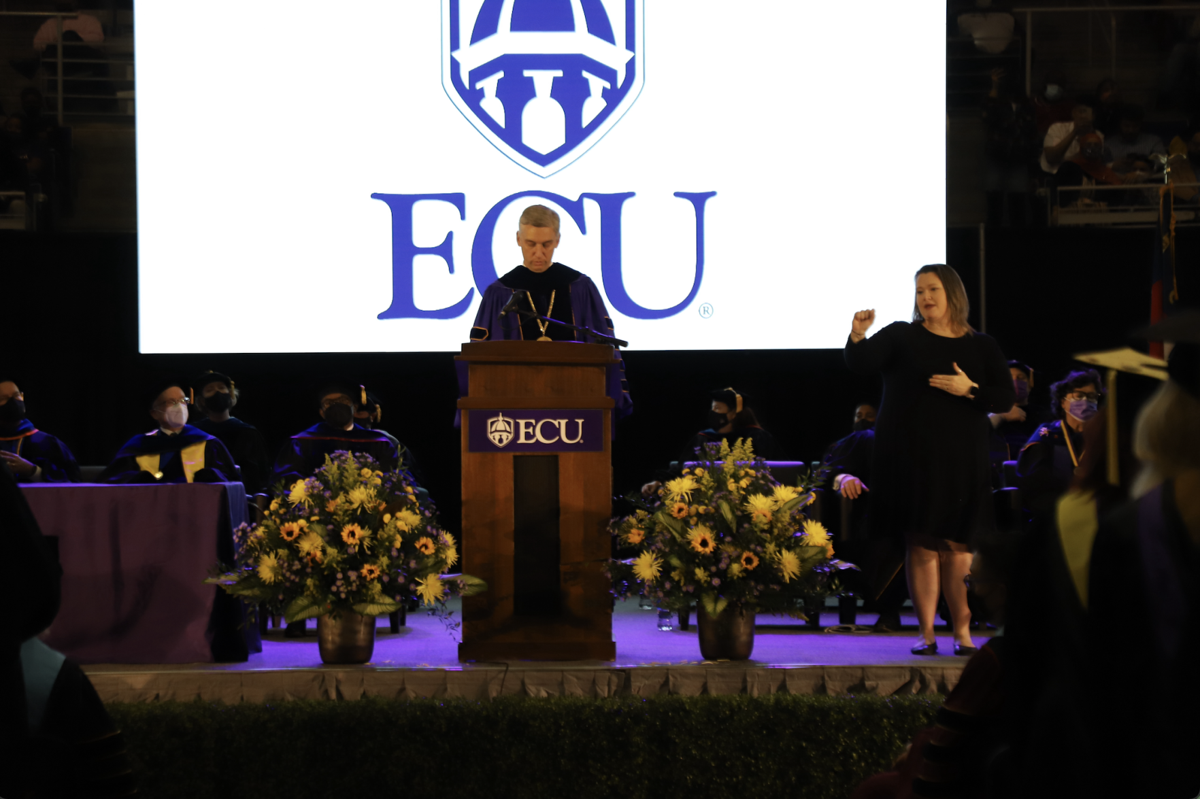 Chancellor Philip Rogers gives his address to the fall class of 2021 graduates. 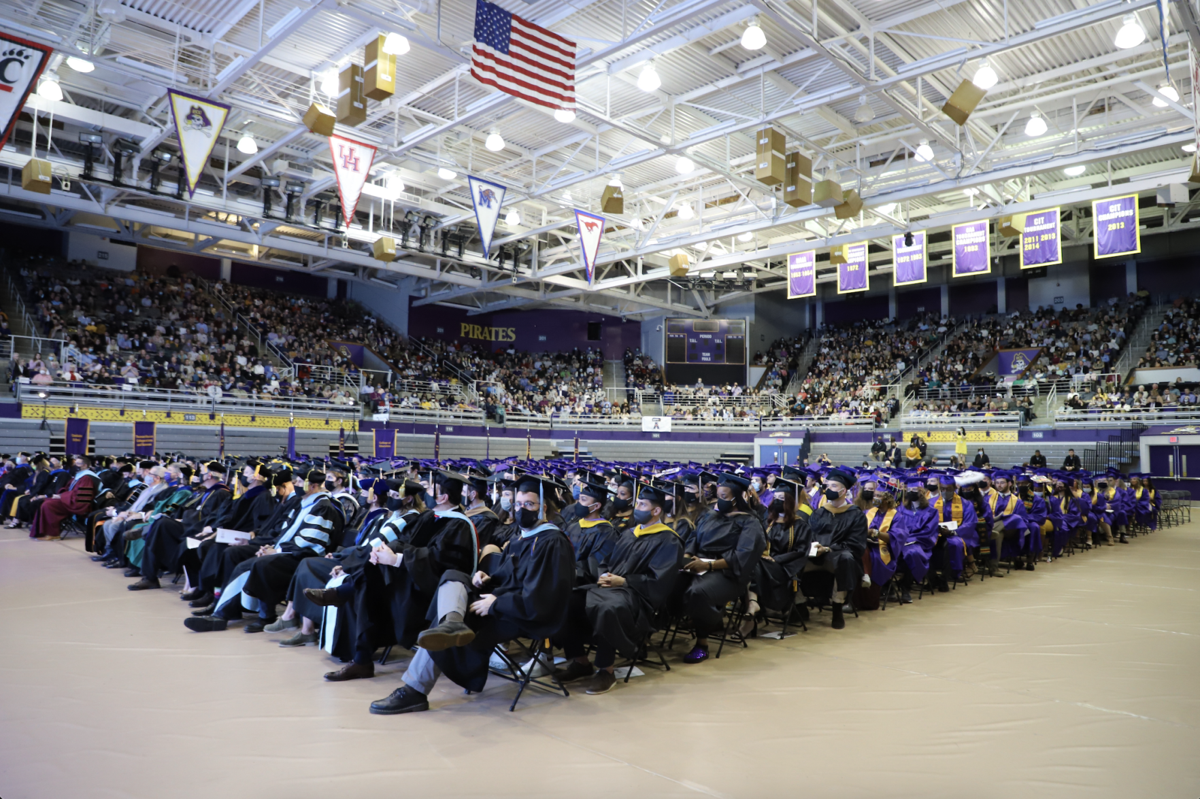 Class of 2021 graduates sit surrounded by family and friends at the commencement ceremony on Dec. 17 in Minges Coliseum. 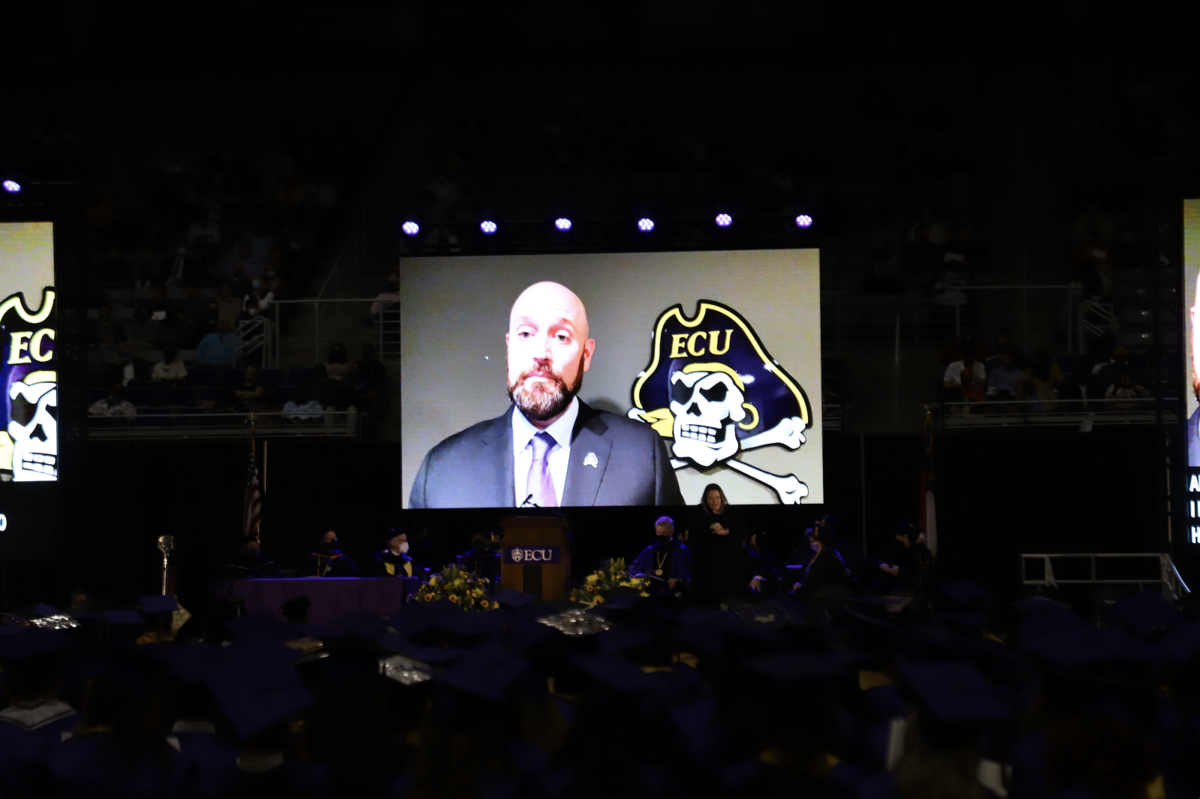 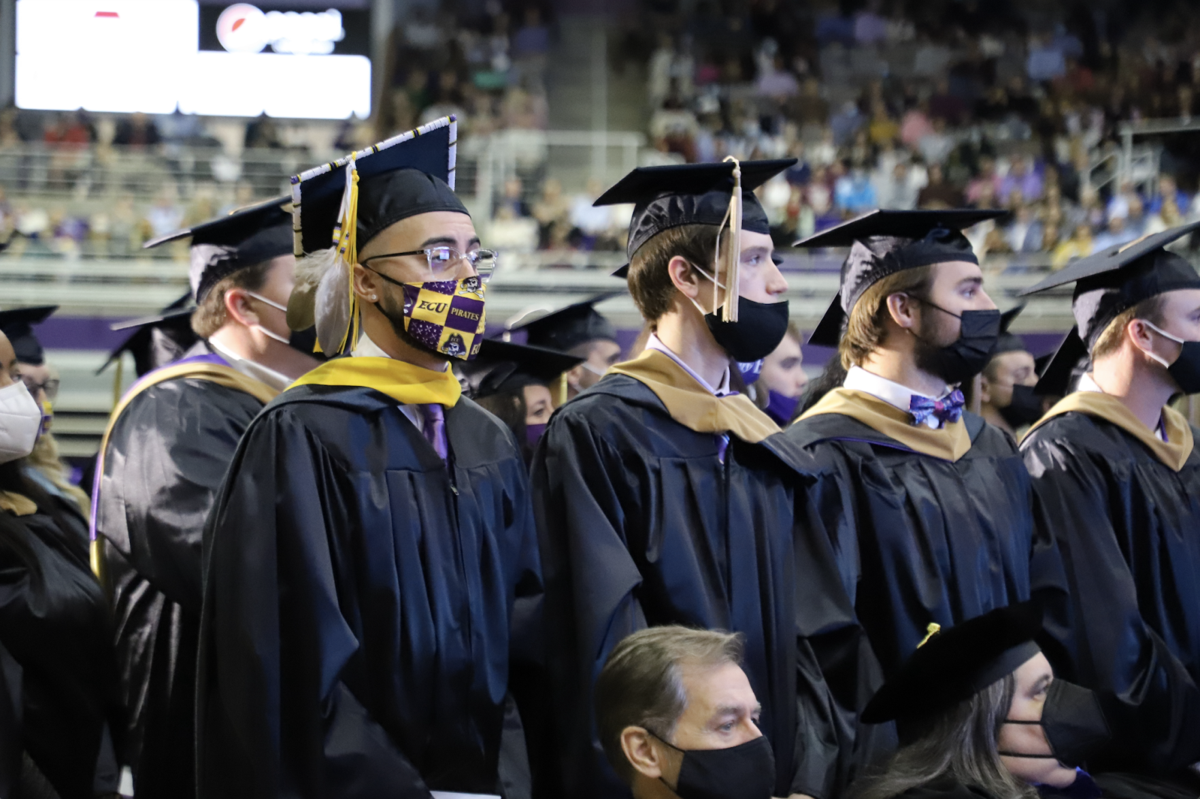 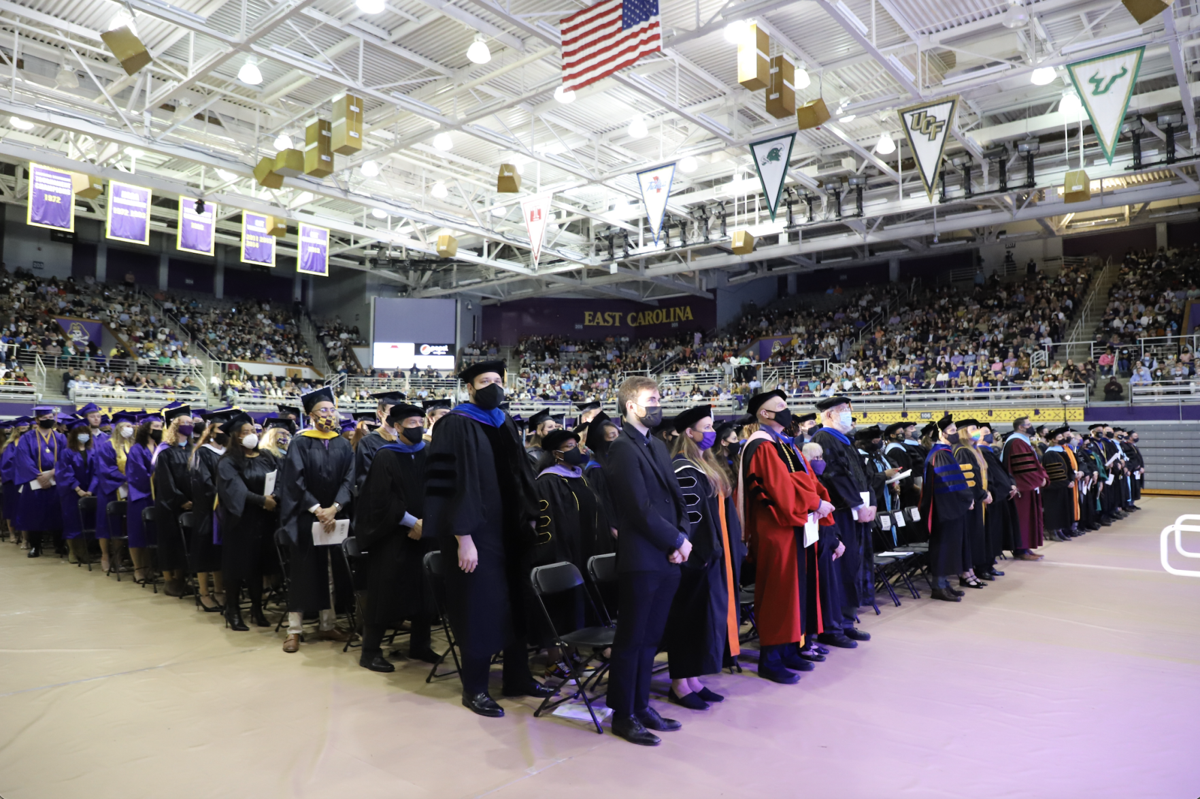 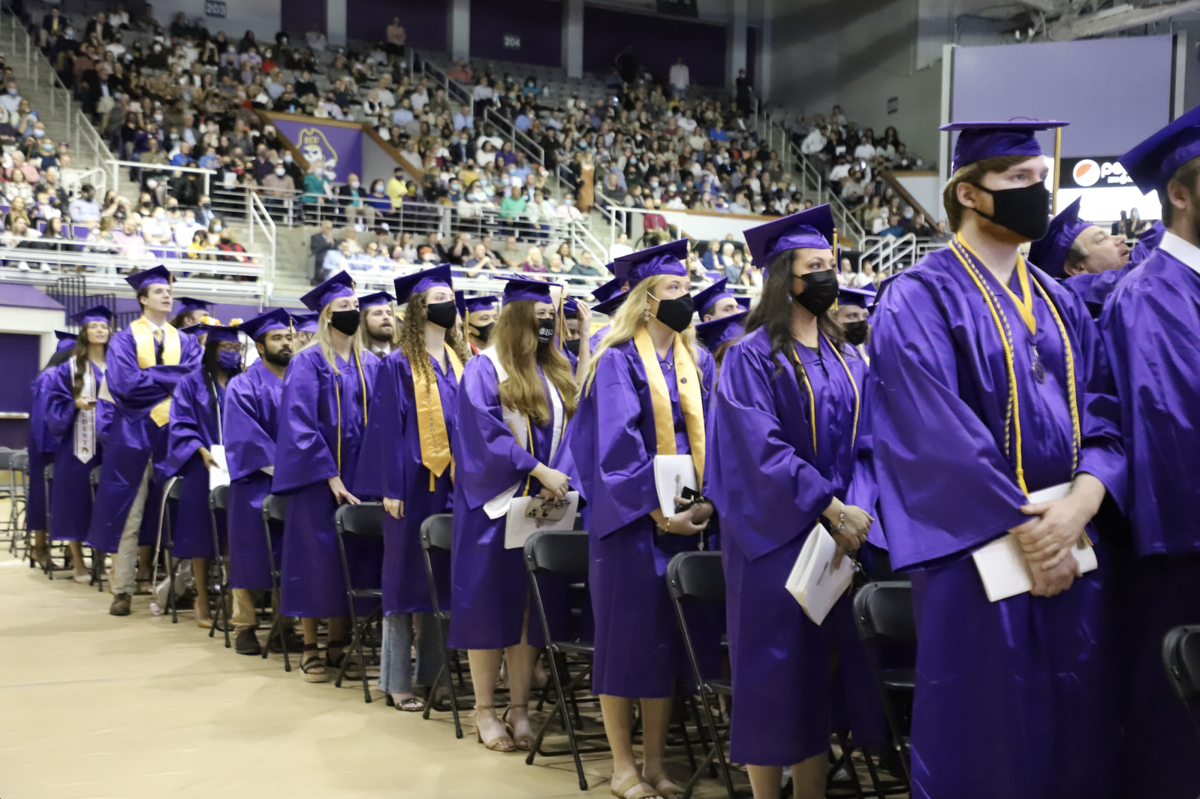 Graduates of the ECU Class of 2021 stand at the commencement ceremony on Dec. 17 in Minges Coliseum.

East Carolina University’s fall commencement ceremonies were held in person at 9 a.m. and 1 p.m.  where faculty, staff and loved-ones gathered to celebrate the accomplishments of the fall class of 2021 on Dec. 17 in Minges Coliseum.

Chancellor Philip Rogers gives his address to the fall class of 2021 graduates.

Class of 2021 graduates sit surrounded by family and friends at the commencement ceremony on Dec. 17 in Minges Coliseum.

Graduates of the ECU Class of 2021 stand at the commencement ceremony on Dec. 17 in Minges Coliseum.

East Carolina University’s fall commencement ceremonies were held in person at 9 a.m. and 1 p.m. on Dec. 17 in Minges Coliseum where faculty, staff and loved-ones gathered to celebrate the accomplishments of the fall class of 2021.

Chancellor Philip Rogers opened both ceremonies by recognizing first-generation college graduates, those who have served in the United States military, graduates who are parents, those who held a full-time job while completing their degrees, student athletes and out-of-state and international students.

“We’re (faculty) incredibly fortunate, we’re incredibly proud to have such talented students like you here at ECU, and we’re all grateful for your many contributions to this ceremony and to our university,” Rogers said during his speech.

The class of 2021 endured difficult years at ECU as COVID-19 spread, Rogers said, and online education was the new precedent and students had to adapt quickly.

Navigation through a pandemic was not easy for college students, but Rogers said their perseverance through the unprecedented time strengthened the soul of Pirate Nation.

“You’ve stayed strong, you’ve stayed committed throughout this period of adversity and now you’re crossing the finish line at a moment when our world needs you the most,” Rogers said.

ECU Student Body President Chandler Ward congratulated and gave advice to his peers as they prepared to depart from ECU.

In his speech, Ward spoke about the daily experiences of an ECU student and how they are preparations for what life will challenge the graduates with next.

“We dealt with the death of Kobe Bryant, three inch murder hornets and a global pandemic all in the same year while trying to pass a virtual class with a professor that still had a flip phone,” Ward said.

Despite the challenges faced by the class of 2021, Ward said the university and education as a whole benefited from the ability of this class to adapt quickly to change.

Class delivery was not the only thing that changed at ECU in the past four years, Ward said. He said the development of many new campus buildings and the appointment of a new chancellor, Philip Rogers, were all things the class of 2021 at ECU got to experience.

“You saw the construction of not one but two state of the art, brand new student centers, the announcement of clinical integration with one of the largest hospital systems in the country, the addition of Town (TowneBank) Tower to Dowdy-Ficklen Stadium, the opening of our brand new 141,500-square-foot biotechnology building. This year, you saw the Pirates have a winning football season. Not every class can say that,” Ward said.

Associate Professor of Hispanic Studies Purificación Martínez delivered a speech with the theme of progress made through the pandemic and determination through future endeavors.

Martíez said as the fall 2020 commencement ceremony was virtual, she is proud of the progress the university has made with the prevention of COVID-19 that allowed this semester’s commencement to take place in person.

“I am so proud of our (ECU’s) responsible approach to the pandemic,” Martínez said. “It made possible face-to-face instruction. Delta, Omicron, we are ECU. We will continue doing what is right, we will outlast you,” Martínez said.

Scott Shook, chairman of the ECU Board of Trustees, spoke on behalf of his fellow board members.

In his congratulations to the graduates, Shook said it is always a great day to be a Pirate, especially when that day is set aside to honor and recognize the fall class of 2021.

“The insite, the experiences and the friendships from your time at ECU will resonate through the rest of your life. So hold tight to this memory, you’ve earned it. This is your accomplishment,” Shook said.

Matthew Slate, managing director of Bank of America Securities, senior trader in the Global Markets Division and 1996 ECU alumnus, was the keynote speaker for spring 2021 commencement and delivered his speech virtually.

Slate said his journey was far from the one he thought he would embark on as he left ECU, but nonetheless, he is proud of where he has come from.

“The value of your education and experiences here at ECU has laid the foundation blocks to fulfilling your dreams. I know each of you are better problem solvers, relationship builders, independent thinkers and workers than when you arrived at ECU,” Slate said.

Thomas James, exercise physiology graduate at the 1 p.m. ceremony, said the ceremony had a lot of great speakers and he particularly enjoyed Ward’s speech. He said he was happy to be able to attend graduation in person after a tumultuous couple of years due to the COVID-19 pandemic.

After graduation, James said he plans to further his education by attending graduate school in hopes of a career in the field of physical therapy.

Kathleen Yllanes, mother of graduate Alexandra Yllanes, attended the 1 p.m. ceremony to celebrate her daughter graduating from the College of Nursing in a one year accelerated program. She said her daughter graduated from the University of North Carolina at Wilmington with a degree in public health before attending ECU’s nursing school.

ECU was a great opportunity for her daughter, Yllanes said, as her daughter met new people, adored her teachers and performed well considering the significant amount of stress that came with completing nursing school within a year.

“It is a tough thing to do in such a short amount of time but she killed it. She got four job offers right away and she’s accepted a position and she’s ready to get started,” Yllanes said.

The East Carolinian has created a forum that centers around topics within the community where readers can express their experiences and concerns. Do you think the university is taking all necessary precautions in terms the ECU community's mental health?

Will you be participating in ECU's Holocaust Remembrance event this Friday?