Skip to main content
You have permission to edit this article.
Edit
Home
About
News
Opinion
Sports
A&E
Classifieds
Advertise

A recent internal audit of the East Carolina University Athletics Department revealed a $2.3 million deficit, but according to an ECU official it isn’t alarming news.

ECU’s Chief Communication Officer Thomas Eppes said in an emailed statement the University is taking on a small amount of debt in comparison to what it believes the payoff will be.

“ECU leaders took on current debt, which is largely due to a change in conferences, with eyes wide open, believing that the financial penalties for leaving one conference and the entrance fees for joining another, as well as investments in student athletes and facilities, would in a reasonable amount of time generate substantially greater income to pay off that debt and make our programs more competitive over the long term,” Eppes said. 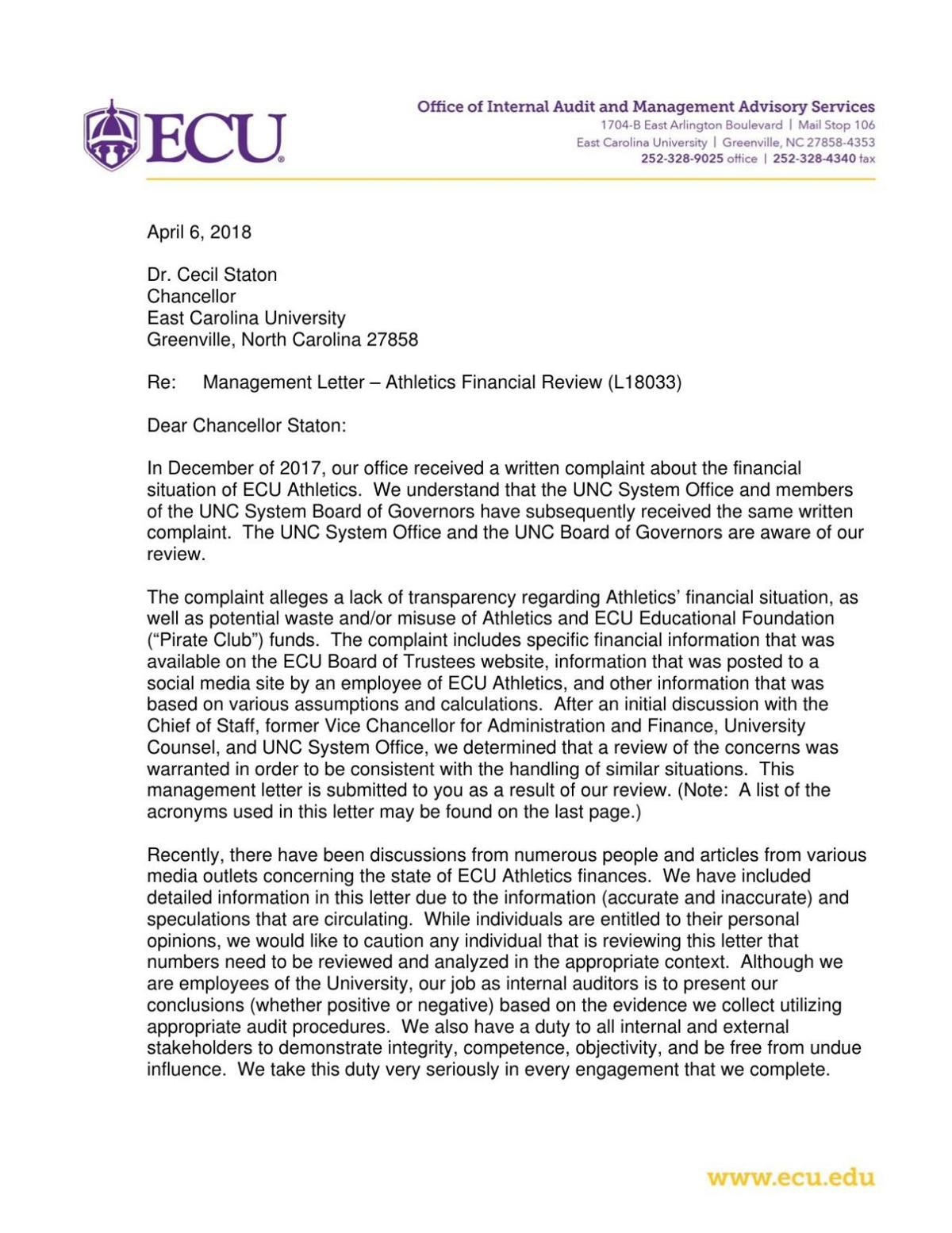 The audit report states a complaint made in December of 2017 which alleged a “lack of transparency regarding Athletics’ financial situation, as well as potential waste and/or misuse of Athletics and ECU Educational Foundation (“Pirate Club”) funds.” The complaint also states the budget has gone from a $3.5 million surplus in 2011-12 to the deficit it faces now, and projected a nearly $3.3 million deficit by the end of 2017-18, totaling in a loss of almost $6.8 million over six years.

The report shows the deficit the Athletics Department has accrued is due in large part to the $1.4 million exit fee paid to exit Conference USA in 2014, a $2.5 million fee to enter the American Athletic Conference, the firing of former football head coach Ruffin McNeill, the addition of the women’s lacrosse team and paying the full cost of attendance for student athletes.

The audit also said revenue projections were consistently not met, as well as coaches and administrators overspending budget in individual sports programs.

These steps are detailed in the audit. Beginning in 2018, and prior to the review, the Athletics’ Department had already begun to implement changes to address the issues. The steps specified in the report are: developing a more realistic annual operating budget, providing actual expense data to coaches, budget managers, and sports administrators on a weekly basis, eliminating a senior-level administrator position, implementing a 10 percent cut in operating expenses (not including payroll, benefits, and scholarships), providing access to and training on budget-related reports and tracking tools coaches and sport budget managers and drafting a five-year operating budget projection.

The complaint also questioned the contract extension awarded to Jeff Compher, who will step down as ECU’s athletic director on May 1 after accepting a $1.2 million buyout. The audit does not address this, saying a decision of that kind is left to the chancellor and board of trustees.

Rick Niswander, the former vice chancellor of administration and finance, showed no worries about the report and thought nothing out of the ordinary is going on.

“The athletic business, like any business, goes in cycles, and they have a deficit right now,” Niswander, a certified public accountant and auditor, said. “Now we’re in a down time, but if everything goes like we think it’s going to go, it’s going to come back up. This isn’t terribly unusual.”

“One of the ideas behind moving to a bigger conference is that you get more exposure, more visibility, which helps the institution, but it’s an investment,” Niswander said. “But if other schools are paying the full cost of attendance and we’re not, then we maybe don’t get that athlete (in the recruiting process.)”