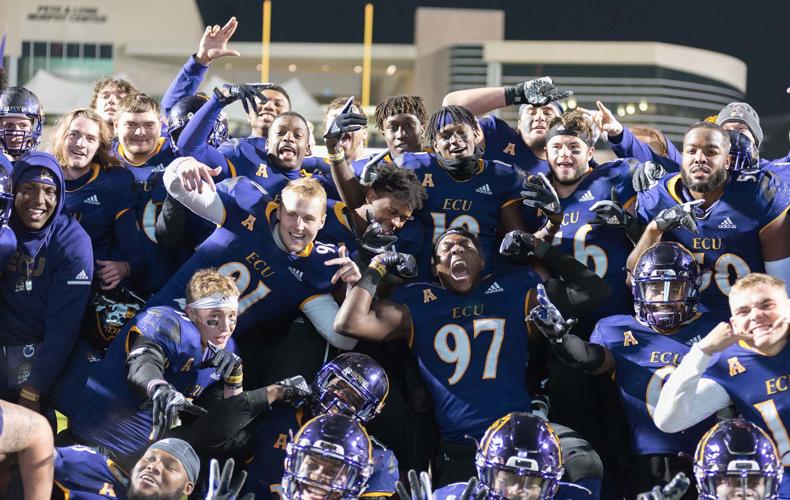 The men of ECU's football team pose for a photo, celebrating the teams victory over UConn. 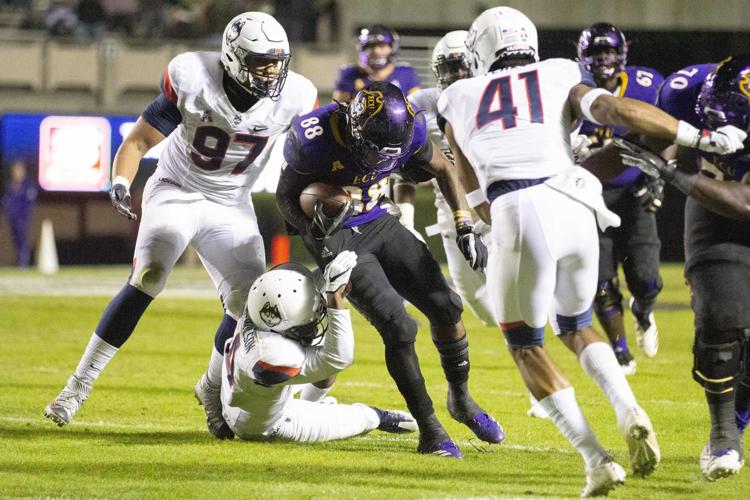 The men of ECU's football team pose for a photo, celebrating the teams victory over UConn.

Freshman quarterback Holton Ahlers and freshman wide receiver Tyler Snead helped East Carolina University send off its seniors the right way with a 55-21 win over the University of Connecticut on senior night Saturday.

ECU (3-7, 1-6 AAC) snapped a five-game losing streak with the win over the Huskies (1-10, 0-7 AAC). It is the Pirates second consecutive senior night win and third straight win over UConn. In a season filled with close losses, ECU head coach Scottie Montgomery was happy the seniors got a win on their night.

"It was a great night for our seniors first and foremost. It's been about them all week and really emotional the last couple of days. We just did everything around them this week. We let them pick the uniforms, let them stand up in front of the team and stay thank you for everything Pirate Nation has meant to them. It was a special night to be able to go out and win in the fashion that we did,” Montgomery said.

ECU responded each time, with back-to-back Ahlers to Snead touchdowns, followed by an Ahlers rushing touchdown knotting the game at 21-21 in the second quarter. A touchdown by senior running back Anthony Scott gave ECU a 28-21 lead, its first lead of the game. A pair of Jake Verity field goals gave ECU a 34-21 halftime lead. ECU had won 33 of its last 36 games when leading at halftime entering Saturday.

ECU never looked back after halftime, scoring 41 unanswered points to finish the game and racking up 637 total yards of offense in the process. Ahlers got another pair of passing touchdowns, one to Snead and one to senior wide receiver Trevon Brown. Redshirt freshman running back Trace Christian added the final score of the game in the fourth quarter.

The ECU running game was an emphasis for the Pirates going into the game against the UConn rush defense. ECU responded by running for 415 yards as a team. ECU entered the game having won 20 of its last 23 games when rushing for more than 200 yards.

Ahlers led the way once again by running for 130 yards on 12 carries, becoming the first ECU quarterback since David Garrard in 2000 to run for 100 or more yards in a game.

Scott got 67 yards and a touchdown on senior night. Christian saw his first action in weeks and added 102 yards and a touchdown, and he and Ahlers combined for the first time ECU has had multiple 100 yard rushers in the same game since 2003. Darius Pinnix and Hussein Howe each added more than 50 yards rushing.

“I don’t think I could paint a better picture,” senior offensive captain Garrett McGhin said. “It was kind of surreal just moving the ball like that and it felt amazing. I didn’t get caught up in it until the fourth quarter and somebody told me that I only have one more quarter left in Dowdy-Ficklen.”

Brown said he felt the need to carry on the streak of 1,000 yard receivers, a baton he was handed from Justin Hardy and Zay Jones.

"I did everything in my power over the summer, back in the spring, to work hard just so I could get this opportunity," Brown said.

UConn recorded 225 yards of offense on the three scoring drives to open the game, but only gained 49 more yards the rest of the way.

The ECU defense, which has struggled with forcing turnovers all season, forced three. Nate Harvey had a strip sack and recovered the fumble. Colby Gore and Damel Hickman added interceptions, with Hickman’s interception ending the game.

"Defensively, that was as dominant of a performance after the second quarter that we've had," Montgomery said. "The takeaways were just beautiful to see. They say you get one, then they'll come in bunches. Let's just hope the come in bunches now and our offense can continue to use those turnovers and turn them into points."

It was a sweet send-off for the Pirate seniors, who have endured a lot of losing in the last three seasons at ECU.

"I'm very thankful and blessed to be here and be a part of this program," senior Cannon Gibbs said. "Tonight is something I'll never forget, my last game in Dowdy-Ficklen Stadium and winning with all my brothers."

ECU hopes to give its seniors an even better send-off when it travels to the University of Cincinnati next Friday at 3:30 p.m.