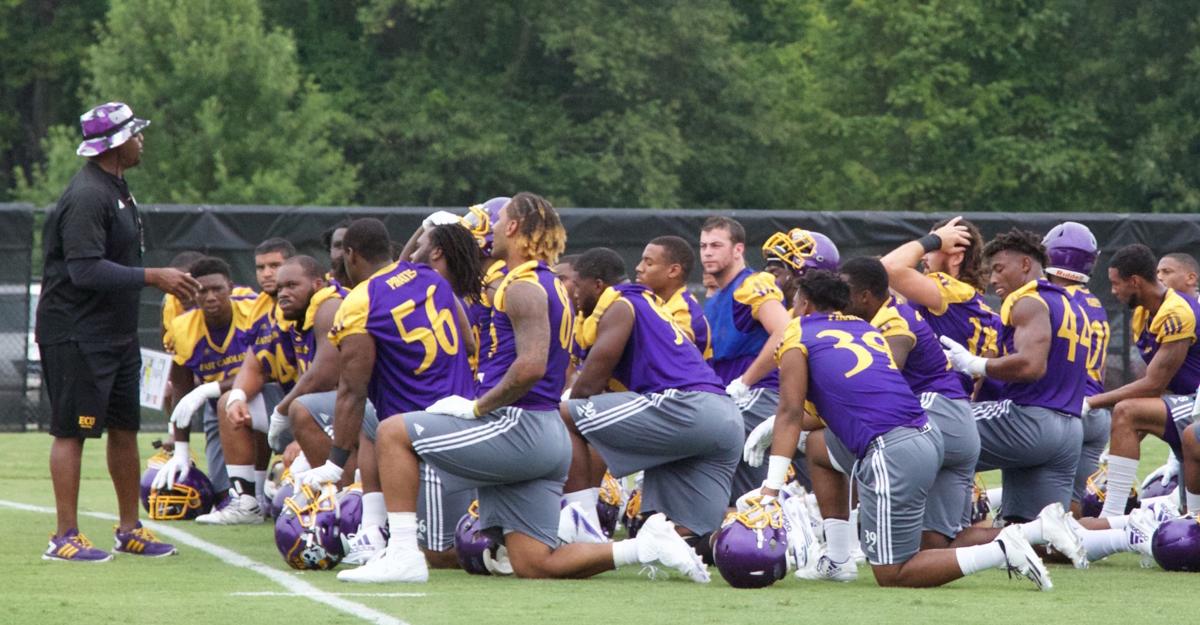 ECU Pirates football team take a knee and listen to Coach Mo's direction during the first practice of the Fall 2017 Pirates Football season.

ECU Pirates football team take a knee and listen to Coach Mo's direction during the first practice of the Fall 2017 Pirates Football season.

The long wait for the return of Pirates’ football is finally over, as Head Coach Scottie Montgomery led the East Carolina University football team through its first official practice of the 2017 season yesterday at the Cliff Moore Practice Complex.

“All in all, a pretty good day for the first day,” Montgomery said. “One thing that we’ve noticed as a staff is the tremendous amount of depth that was added to the team, but also a lot of talent. It’s day one, but the type of day one that you got to have if you’re talking about being a good football team.”

One position that has depth for ECU is quarterback. Junior Gardner Minshew and graduate transfer from Duke University Thomas Sirk, are using fall practice as a stage to fight for the starting quarterback job. While Minshew and Sirk are both dueling for the same position, they bring different approaches to how they play.

Coming off a 3-9 season in his first year as ECU’s football coach, Montgomery laid out two objectives for fall camp, with the first being to build team camaraderie, and the second looking to focus more on what his players do on the field.

While Montgomery admitted the Pirates didn’t block well last year, he also said the offensive line is looking stronger and he’s happy with their progress, thanks in part to veteran leadership.

“I’ve told the team and the coaches that the first thing we have to do is build team chemistry. A lot of people think team chemistry happens on the field, but not when we’re leaving the field, at the dinner table, at home, all these places where they truly build their team chemistry,”

Montgomery said. “The second objective is we have to get better fundamentally. If you go back, we didn’t block well, we didn’t tackle well. We’ve got to get better at that. You can’t just keep giving it lip service.”

Two Pirates that have stepped into the light are the dynamic leadership pieces of Garrett McGhin and Brandon Smith. Due to their physical stature, the 6-foot-6 McGhin and the 6-foot-8 Smith have been able to step into the accountability role for their teammates on the field as well as their work ethic off the field. During the offseason, according to Montgomery, their work ethic was at the level that earned them the ability to hold their teammates accountable in every way.

Another player ECU fans should be interested to hear about is junior wide receiver Trevon Brown. Brown was slotted to be a starter last season but missed the entire 2016 season after being ruled ineligible a day before the season opener. A neck injury limited him to non-contact drills during spring practices, but Montgomery said he hopes Brown will soon be cleared to play.

“He’s done a good job of getting himself back in good standards to be able to play and that’s what he’s done,” Montgomery said. “Hopefully we can get him cleared medically.”

Yesterday’s practice, which had the players in shorts and helmets, was the first of four straight days of practice before the team’s first off day of camp, which is scheduled for Monday. The Pirates will start using shoulder pads on Saturday and progress to a full gear workout on Tuesday per NCAA rules, with camp wrapping up on Aug. 20.